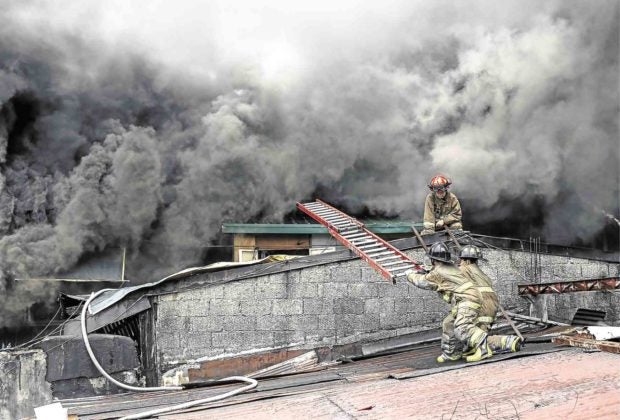 GRIM END Five children ranging from 1 to 12 years old are dead after a fire razes their house and several others on Laperal Street in Tondo, Manila. —EARVIN PERIAS

Five siblings who were all minors died on Monday after some of them started playing with a lighter after their parents went out, setting their shanty in Tondo, Manila, on fire.

Only one of the siblings survived, 9-year-old John Michael, who jumped out a window.

The police said John Michael told them he was awakened by the heavy smoke inside the house.

He told John Mike Twister that they had to get out, but the latter refused because he did not want to leave their younger siblings behind.

Alumno said the children were on their own when the fire broke out around 9:10 a.m.

Their father, Michael, went out earlier to have his tricycle repaired while the mother, Emily Lopez, was buying breakfast.

“As part of their routine, the mother usually goes out to buy breakfast and comes back before the children wake up,” Alumno said.

When Emily returned, however, their room on the third floor of the three-story shanty on Laperal Street was already ablaze and all her children had been rescued and taken to the hospital.

Alumno said the five victims were already unconscious when they were taken to different hospitals where they were declared dead on arrival.

Since the neighborhood was filled with makeshift houses, the flames spread to nearby shanties and the fire reached the first alarm at 9:24 a.m.

It razed around 30 more houses before it was declared out at 1:34 p.m. Mopping out operations were still ongoing at press time.