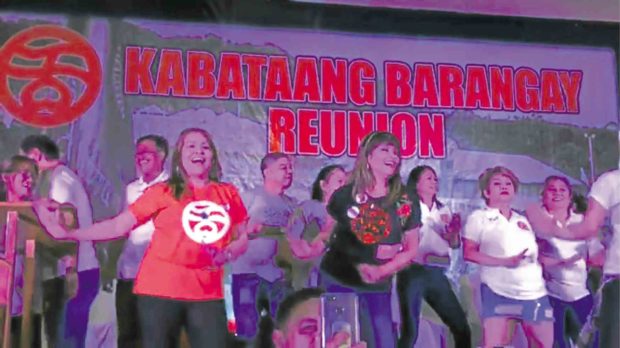 DANCE NUMBER Ilocos Norte Gov. Imee Marcos, national chair of the Kabataang Barangay (KB), dances to “Rock Baby Rock” during the reunion of members of the Marcos dictatorship’s youth arm at the UP Bahay ng Alumni in Diliman, Quezon City. This screenshot was taken from the Facebook video of National Youth Commission officer in charge Ronald Cardema.

It was a reunion unlike any other as it was staged in the bastion of youth activism.

And the gathering of Kabataang Barangay (KB) members would have been unimaginable had it been done during the martial law years of the Marcos dictatorship.

Members of the now-defunct KB gathered at the University of the Philippines (UP) Diliman, Quezon City, on Saturday to celebrate its 43rd year. The KB was created by Presidential Decree No. 684 in April 1975 and preceded the Sangguniang Kabataan.

The event could have been passed off as a run-of-the-mill event, if not for the irony of the venue.

The stage of the First Quarter Storm and home to activists and critics of martial law, the UP Diliman campus had been the stronghold of the antidictatorship movement during the regime of the late President Ferdinand Marcos.

At the UP Bahay ng Alumni, however, the KB reunion showed no playback of the university’s historical role.

There were life-sized standees of the late strongman and his wife Imelda near the entrance.

In photographs posted online, attendees flashed the “V” sign — a known Marcos hand gesture — along with the closed fist, a trademark of President Duterte, an ally of the Marcos family.

Guest of honor was Ilocos Norte Gov. Imee Marcos, who was appointed by her father as KB national chair when she was 21.

Her stint, however, had been marred by controversy, particularly by the death of student activist Archimedes Trajano, who had questioned her about her appointment. Trajano was later found dead in a Manila street, his body bearing signs of severe torture.

In videos posted on social media, Marcos spoke of her brother Ferdinand Jr.’s electoral protest for the vice presidency.

Photos that surfaced online also showed UP president Danilo Concepcion, president of the KB Federation in Metro Manila from 1976 to 1978.

“We chose [it] after consultations with our members because of its space that can accommodate our expected number of attendees, parking area and price,” Olalia said.

Around 740 people, he said, attended the event.

For survivors and critics of martial law, the event was an orchestrated attack on the university and the principles it stands for.

Bonifacio Ilagan, who was detained and tortured by the martial law regime, said the event was part of the Marcoses’ plans to “resurrect the dead” for the coming elections.

“At the outset, it is surprising that the Marcos gang would hold their event in UP, with the university having played a key role in the antimartial law struggle,” Ilagan said.

“But seen in the context of their grand scheme to turn history upside down and return to Malacañang, it becomes a carefully thought-out detail.”

Ilagan noted that the Marcoses were “now moving in sync” with the current shakeups in the political arena, like former President Gloria Macapagal-Arroyo becoming Speaker of the House of Representatives, the appointment of Teresita Leonardo-De Castro as Chief Justice and the near-conclusion of Bongbong’s electoral protest.

Block Marcos, an antidictatorship group, slammed the reunion as a “symbolic attack” on those who fought the dark days of martial law.

“We are outraged that this event was allowed to happen, at UP no less,” said member Herbert Docena.

“We know that UP has been at the forefront of the fight against dictatorship . . . We are seeing here that prodictatorship forces are coming together: Getting more organized, confident and aggressive.”

“By holding this event inside UP, they were effectively reclaiming ground in one of the bastions of opposition against dictatorship and claiming it as their own,” Docena said.

Yael Toribio, chair of the UP Diliman Student Council, said he was also surprised that the event was allowed on the campus.

“This is an insult not only to the decades-long struggle of UP students in fighting the oppressive system in our society—from the martial law era up until the atrocities of the Duterte administration today—but also to the thousands dead and missing during the dark chapter of our country’s history,” Toribio said.

Sought for comment on the use of the venue, UP vice president for public affairs Jose Dalisay Jr. said it was the UP Alumni Association that handles the rental of the Bahay ng Alumni.

“’I can only presume that the proper representations were made and the fees paid for the use of the facility for this private event,” Dalisay told the Inquirer.

He noted that as a private rental venue, the process did not go through the UP administration.

“As a public university, UP is open to the expression of all political beliefs and persuasions,” he added.

Just recently, the eldest Marcos daughter was under fire after she called Filipinos to “move on.”