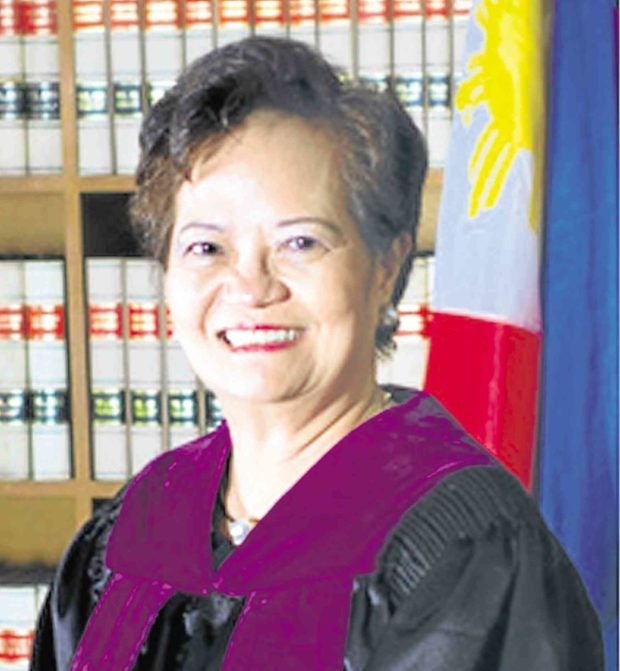 She didn’t have to kick her heels for long to land the job. But when she got it at last, Associate Justice Teresita Leonardo-de Castro stared at retirement that was just six weeks away.

President Duterte had already picked De Castro to be the new Chief Justice even before the Judicial and Bar Council (JBC) submitted to him on Friday its short list for the Supreme Court’s top post.

A source privy to the President’s decision told the Inquirer on Saturday that Mr. Duterte put the accent on De Castro’s seniority in the high court.

“[The President] looked at [the] credentials [of the three candidates] and gave weight to seniority,” said the source.

De Castro—the first of the five magistrates to testify against ousted Chief Justice Maria Lourdes Sereno in the committee on justice hearing of the impeachment complaint against her in the House of Representatives—outranked Associate Justices Diosdado Peralta and Lucas Bersamin.

All three were appointed to the high court by former President and now Speaker Gloria Macapagal-Arroyo.

Malacañang hailed De Castro’s selection just minutes after it was announced by Justice Secretary Menardo Guevarra, an ex-officio member of the JBC.

Guevarra told reporters on Saturday he had been informed that the President’s choice was “publicly announced by Special Assistant Bong Go.”

He said the formal appointment would be released by Executive Secretary Salvador Medialdea on Tuesday. Monday is a holiday.

When De Castro assumes office on Tuesday, succeeding Sereno, she will serve 41 days as Chief Justice because she will reach the mandatory retirement age of 70 on Oct. 8. She was appointed to the Supreme Court on Dec. 4, 2007.

Her term as top magistrate will also be the shortest in the country’s history, surpassing the previous record of 75 days of Chief Justice Pedro Yap, who served from April 18 to June 30, 1988.

“Her appointment as Chief Justice is a fitting finale to her illustrious career in both the [Department of Justice, or DOJ] and the judiciary,” Guevarra said.

De Castro is expected on Tuesday to preside over the high court en banc’s scheduled oral arguments on the petition challenging the validity of Mr. Duterte’s withdrawal from the Rome Statute that established the International Criminal Court.

The human rights lawyers’ group National Union of People’s Lawyers (NUPL) said it hoped De Castro would restore public trust in the highest court of the land and address doubts on her independence and impartiality.

“The new Chief Justice will have to credibly address uncomplimentary views about her independence and impartiality. We need a leader who inspires and who commands respect and admiration,” NUPL president Edre Olalia said.

De Castro’s selection as the country’s second female Chief Justice came two days after a group of opposition congressmen filed an impeachment complaint against her, Peralta, Bersamin and four other justices who voted on May 10 to oust Sereno through a quo warranto suit.

But Solicitor General Jose Calida, who brought the case against Sereno, said De Castro and the others should not worry because the impeachment case “will not see the light of day.”

Echoing the allegations of the justices, Calida’s quo warranto suit accused Sereno of lack of integrity for her supposed failure to fully declare her statements of assets, liabilities and net worth (SALNs), and for alleged tax declarations and unauthorized expenses.

Sereno sought the inhibition of De Castro, Peralta, Bersamin and Associate Justices Noel Tijam and Francis Jardeleza from the case, but they refused to do so.

In De Castro’s earlier House testimony—also the first by a sitting Supreme Court justice in a congressional inquiry—she accused Sereno of “undermining” the high tribunal by issuing several orders that did not reflect the consensus of the full court.

It was the second time that De Castro had been short-listed for the top magistrate’s post.

In 2012, she also vied for the post along with acting Supreme Court Chief Justice Jose Antonio Carpio and several others, including Sereno—then the most junior justice of the high court—who eventually got the nod of former President Benigno Aquino III and became the country’s first female Chief Justice.

Before De Castro’s appointment to the high court in 2007, the political science graduate of the University of Philippines (UP) served as presiding justice of the antigraft court Sandiganbayan from Dec. 15, 2004.

De Castro’s career in public service began on Feb. 19, 1973, when she joined the Office of the Clerk of Court of the Supreme Court.

From January 1975 to November 1978, she served as a legal-judicial assistant and as member of the staff of the late Chief Justice Fred Ruiz Castro.

In December 1978, she transferred to the DOJ where she served as state counsel 1 and rose through the ranks to become assistant chief state counsel in 1997.

De Castro chaired the Sandiganbayan special division that convicted former President Joseph Estrada for plunder and sentenced him to reclusion perpetua on Sep. 12, 2007. Estrada, however, never spent a day behind bars as he was pardoned by his successor, Arroyo.

In July 2016, she voted for the release of Arroyo and the dismissal of the plunder charges filed against her by the Aquino administration in connection with the alleged misuse of the Philippine Charity Sweepstakes Office’s intelligence funds.

De Castro penned a 2008 ruling upholding Arroyo’s power as President to invoke executive privilege in the Senate inquiry into her alleged involvement in a botched $329-million broadband deal with Chinese telecom ZTE Corp.

She was also among the justices who dissented in the same year on the decison declaring as illegal and unconstitutional the memorandum of agreement on ancestral domain between the Arroyo administration and the Moro Islamic Liberation Front.

In April 2010, less than a month before the presidential elections, De Castro was among the justices who voted in favor of allowing Arroyo, whose term was ending on June 30 of that year, to appoint the successor to the retiring Chief Justice Reynato Puno, insisting that the judiciary should be exempt from the election ban.

Arroyo then appointed in May 2010 the late Chief Justice Renato Corona, who was impeached in 2012 for nondisclosure of his foreign deposits in his SALN.

In November 2016, De Castro was also among the nine Supreme Court justices who dismissed the petition of martial law victims protesting the burial of Ferdinand Marcos at Libingan ng mga Bayani. —WITH A REPORT FROM ANA ROA, INQUIRER RESEARCH

Read Next
‘Luis’ leaving, but not quietly
EDITORS' PICK
‘A greener, cleaner tomorrow’: A how-to guide for Filipinos who want to help with today’s energy crisis
Get exciting deals and discounts when you download the new McDonald’s App
FlipTop rapper Loonie freed on bail
Countries with confirmed cases of coronavirus
SM continues to send relief assistance to remote towns in Batangas
China expands lockdown against virus, fast-tracks hospital
MOST READ
Taal’s sulfur dioxide emission increases
No time for revelry; Tagaytay instead plans for alert level 5
Megan Young, Mikael Daez get married
Palace: US Senate move also made Duterte junk VFA
Don't miss out on the latest news and information.