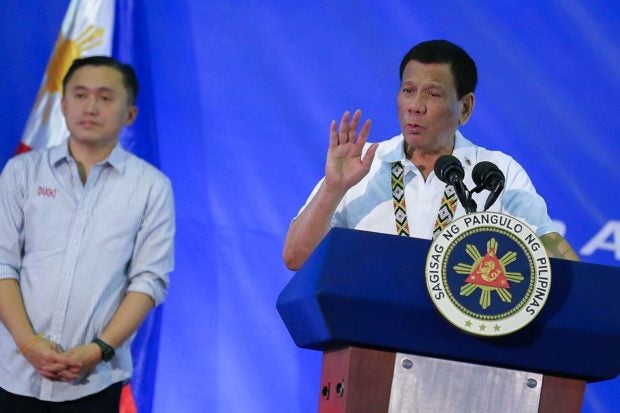 His skin looks dark and burnt not because of cancer or kidney problems, but because he “likes to roam in the mountains.”

President Rodrigo Duterte on Thursday night sought to quell lingering rumors about his ill health, as he taunted Communist Party of the Philippines (CPP) founding chair Jose Maria Sison for fanning speculation about his physical condition.

Speaking to military personnel on the 12th anniversary of the Eastern Mindanao Command in Davao City, Mr. Duterte said Sison, who on Sunday told his Facebook followers that the President had slipped into a coma, actually “played into my hands.”

Mr. Duterte said he intentionally allowed his lieutenants to spread rumors that he was dying, and “I knew he (Sison) would swallow the bait … He really played into my hands. I let him in.”

Citing sources in Malacañang, Sison earlier noted on social media that the “darkness of [Mr. Duterte’s] face had become aggravated from its appearance the other day and that his walk and handshake had become more unstable.”

But when the President made a public appearance on Tuesday night in Cebu City, he appeared to be in good spirits, though he was seen wiping his nose several times.

In his speech on Thursday, Mr. Duterte unloaded fresh ammo in his long-running word war with Sison.

“Look at an ideologue. Look at what he is now. Instead of focusing on the betterment of the movement, he is saying things like my face looks burnt,” Mr. Duterte said, referring to the CPP leader who has been living in exile in the Netherlands since the late 1980s.

“Whose skin wouldn’t darken? I’m the only one who likes to roam in the mountains,” he said.

Sison, he said, was apparently not familiar with his style of deceptive language. Duterte went on to give an example: “‘Oh, how are you, Mayor?’ ‘Ah, I have cancer. Third stage. I don’t know if I can…’”

“(B)efore I left Malacañang, I whispered something (to a person with a line to Sison). I said: Tell him that I flew somewhere because I am suffering from kidney failure and my cancer is spreading to my…’”

“There was also a call. ‘Duterte, he’s slightly … his eyes were already closed when he got into his chopper.’ Stupid Sison believed it!” he said.

As though to prove his enduring vigor, Mr. Duterte said he spent the rest of that day “searching for beautiful women.”

Mr. Duterte then came up with his own diagnosis of his nemesis: “What’s wrong with Sison is he is suffering from cancer of the colon, the intestines. He has undergone operation several times but the cancer has spread to his pancreas. Yet he still boasts that I’m comatose. Comatose your s***.

“You’re the one who’s dying. How arrogant,” he said.

“(To) the Norwegian government (sic): He’s a freeloader. He’s the kind of person who would go with you to receive everything for free. There’s really nothing there anymore,” he added.

“I will let you (Sison) go back to the mountains tomorrow. Tell your comrades. Ask them what else they need because progress is already here. And you can’t topple the government. You can’t even lead a single barangay,” Mr. Duterte said.