Sessions bites back as Trump says impeachment would sink economy 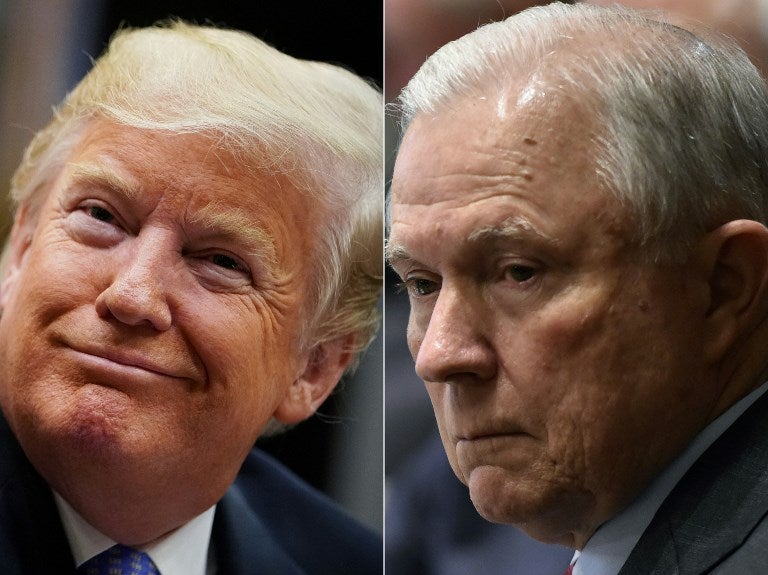 This combination of file pictures created on August 23, 2018 shows US President Donald Trump(L) during a roundtable discussion on the Foreign Investment Risk Review Modernization Act in the Roosevelt Room of the White House on August 23, 2018 and a photo taken on July 18, 2018 of Attorney General Jeff Sessions as US President Donald Trump speaks during a cabinet meeting at the White House in Washington, DC.  AFP

WASHINGTON – US President Donald Trump has warned the US economy would collapse if he were impeached, as legal chaos roiling the White House had experts saying his presidency is under threat.

Days after Trump’s former fixer Michael Cohen told a federal judge he made illegal campaign contributions at the president’s request – to silence women alleging affairs with Trump – the Republican leader told Fox News that an impeachment would only cause more turmoil.

“I will tell you what, if I ever got impeached, I think the market would crash. I think everybody would be very poor,” Trump said on “Fox and Friends.”

The US president then launched into a rambling statement on job creation and other economic progress he said had been made during his presidency.

“I don’t know how you can impeach somebody who has done a great job,” Trump said.

Trump was dealt severe back-to-back blows on Tuesday when Cohen pled guilty to illegal campaign finance violations and former Trump campaign chairman Paul Manafort was convicted of tax and bank fraud within minutes of each other.

The Manafort conviction was the first case sent to trial by the special prosecutor probing Russian meddling in the 2016 election.

But an unchastened Trump appears intent on riding out the storm as Washington grapples with the latest upheaval in his tumultuous presidency.

The president has insisted he did nothing wrong after Cohen, his longtime private lawyer and fixer, implicated him in the illicit hush payments made before the 2016 election to two women who claimed to have had affairs with the Republican presidential candidate.

Because the hush payments were intended to influence the outcome of the elections, they violated US laws governing campaign contributions.

In entering a guilty plea, Cohen said the payments were made “in coordination with and at the direction of a candidate for federal office,” in clear reference to Trump.

Trump was evasive when asked in the Fox News interview if he had instructed Cohen to make the payments, saying that his former lawyer “made the deals,” and insisted that Cohen’s actions were “not a crime.”

“Campaign violations are considered not a big deal, frankly,” he said.

Trump then said the hush payments were financed with his own money — to which Cohen had access — and that while he had no knowledge of them at the time, he had since been fully transparent.

Trump aimed an especially vicious attack at Sessions, whom he has criticized often, again for recusing himself from the Russia investigation, saying Sessions should have warned him when he got the job that he planned to do so.

“What kind of a man is this?” Trump said, adding that Sessions “never took control of the Justice Department.”

Sessions made a rare counterattack, saying in a statement, “I took control of the Department of Justice the day I was sworn in, which is why we have had unprecedented success at effectuating the President’s agenda.”

“While I am Attorney General, the actions of the Department of Justice will not be improperly influenced by political considerations,” Sessions said in what was seen as a veiled jab at Trump.

Despite Trump’s defiant tone on his own legal woes, Washington-based campaign finance expert Kate Belinski, of the Nossaman law firm, said to expect legal consequences for both Trump and his campaign – most likely in the form of a civil complaint before the Federal Election Commission.

Trump praised Manafort for going to trial, in which the president’s former campaign chief was found guilty of eight counts of financial fraud.

The president lauded 69-year-old Manafort for leaving his fate to a jury rather than striking a plea deal – a move that has sparked speculation Manafort hopes for a pardon.

Asked if he was considering such a move, Trump said only that he has “great respect for what he has done, in terms of what he has gone through.”

Trump’s comments came as central bank chiefs from around the world and leading economists were to gather Friday for an annual economic symposium in Jackson Hole, Wyoming.

It will be the first such meeting for US Fed chairman Jerome Powell, whom Trump has criticized by name, along with the US central bank itself, for interest rate hikes that Trump says will hinder economic growth.

Trump’s remarks raised eyebrows because it is considered unorthodox for a US president to comment on Fed actions and be seen as meddling.  /kga

Read Next
Silver-tongued Turnbull bows out as Aussie PM
EDITORS' PICK
Acer Philippines welcomes you to its first flagship store
New Year, New Rediscoveries
Biden says Covid-19 expected to kill ‘well over 600,000’ in US
UP president challenges AFP claim on Reds’ campus infiltration
WHO says fabric facemasks still work against virus variants
Is your company a growth champion? Stand up and be recognized!
MOST READ
NBI files raps vs top execs of 2 tech firms
Ate Vi’s message to those against ABS-CBN’s franchise renewal
Cop, 12 others killed in Maguindanao shootout
K-pop stans take over ‘#ImpeachBidenNow’ to silence Trump supporters
Don't miss out on the latest news and information.