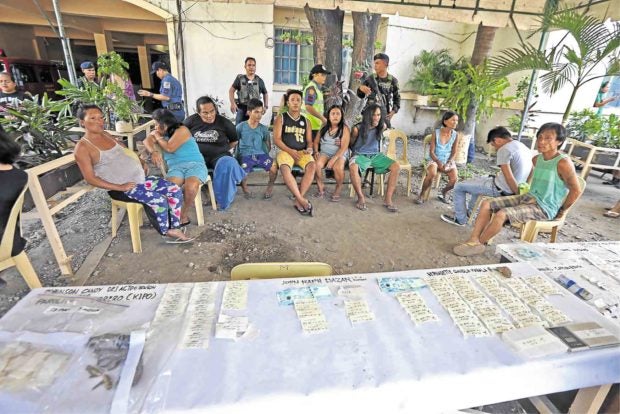 CEBU CITY—A day after President Rodrigo Duterte called most law enforcers in Cebu as “addicts, the police immediately sprang into action. Their “one time, big time” operation on Wednesday killed three drug suspects and arrested 75 others in the province.

Killed were Parolito Obrero of Talisay City, Eugene Fermin of Mandaue City and Phil Jon Ediza of Moalboal town, southwest Cebu. They tried to shoot at the police, prompting them to retaliate, according to Chief Supt. Debold Sinas, Central Visayas regional police director.

Sinas, however, said the recent operation was not done to prove Mr. Duterte wrong.

“We did not do this just because we were pressured by the President’s statement. This was part of a series of operations that were planned weeks before his pronouncements,” he said.

Sinas admitted that illegal drugs remained a big problem in Cebu. However, he said law enforcers were doing their best to address it.

In his address to 200 mayors from the Visayas on Tuesday night, Mr. Duterte said almost all of Cebu’s law enforcers—the police and the Philippine Drug Enforcement Agency (PDEA)—were involved in illegal drugs.

“Your policemen here in Cebu are addicts. Almost all, including their officials, are into drugs. Your PDEA here as well, even those holding high positions, even act as distributors of illegal drugs,” he said.

He warned them to stop their illegal operations or regret their actions.

Since July 27, two PDEA officers, Baby “Earl” Rallos and Von Rian Tecson, had been killed in separate ambushes in Cebu.

Police and PDEA officials vowed to remove rogue personnel and step up their campaign against illegal drugs.

“What President Duterte announced was very alarming to us,” Sinas said. “We will not justify it but instead investigate and relieve those police officers who are allegedly into the illegal drug trade.”

He said they would reshuffle police officers in Cebu and conduct regular random drug tests among policemen. He also said they would submit a report of noncompliant and erring policemen to the Philippine National Police’s Counter-Intelligence Task Force in Camp Crame for appropriate actions.

PDEA, for its part, vowed to adopt “zero tolerance” on personnel who were involved in illegal drugs. It said internal cleansing had always been one of its priorities.

“We acknowledge that it is an integral part in the effective performance of our mandate as the lead agency in the campaign against illegal drugs. The agency has in place ethical and firm mechanisms to govern the actions of our personnel, and these ensure that we maintain a high standard of service to the people,” PDEA said in a statement.

In Maguindanao province, PDEA agents and soldiers seized more than P1 million worth of “shabu” (crystal meth) from two men during a drug bust at the public market in Datu Odin Sinsuat town on Wednesday.

In Luzon, four drug suspects were killed in separate shootouts with policemen in the provinces of Laguna, Cavite and Batangas on Wednesday and Thursday. —WITH REPORTS FROM EDWIN O. FERNANDEZ AND MARICAR CINCO