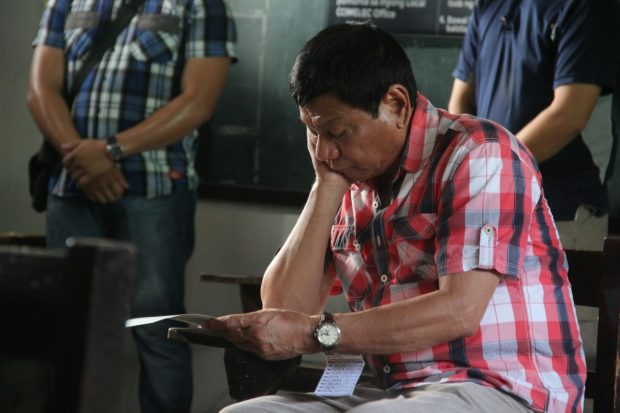 President Rodrigo Duterte has revealed that he is in “perpetual pain” due to a spinal injury he suffered from a motorcycle accident in the past.

Duterte made the admission on Tuesday amid speculations that he fell into a coma and that he was seriously ill.

“‘Yung sa disgrasya ng motor, I have a C4 and C7 na nag-impinge. That’s why I am in perpetual pain. On any day, it’s 7 in a scale of 10,” the President said in a speech before the Visayas cluster of the League of Municipalities of the Philippines (LMP) in Cebu City.

The President said his partner Honeylet Avanceña does not want him to undergo an operation.

Duterte earlier admitted that he used to take fentanyl for the pain.

According to the US National Institute on Drug Abuse, fentanyl is an opioid pain reliever that is 50 t0 100 times more potent than morphine. It is prescribed for cancer pain and other chronic ailments.

Speculations surfaced on social media on Sunday after exiled communist leader Jose Maria “Joma” Sison cited “the latest report,” which he did not identify, that Duterte had gone into a state of coma.

The President debunked the claim of Sison by appearing on a Facebook video where he was having dinner. He criticized the founder of the Communist Party of the Philippines for himself being sick and burdening a foreign government with his illness.

“Kama lang sana ako pero comatose. Matagal pa ako. You know, Mr. Sison, you are a refugee in that country. You are availing of the funds of the Norwegian people. You do not pay anything. You are staying there for free. And you are sick with cancer, in and out of the hospital,” he said. /cbb