Despite US warning, DND chief in Russia for weapons 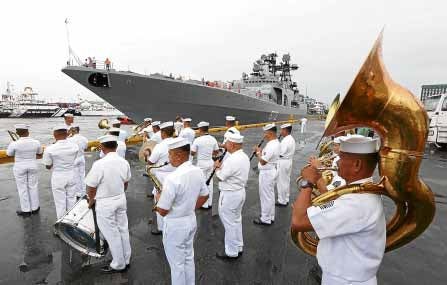 IMPROVING TIES The Russian antisubmarine ship Admiral Vinogradov docks near South Harbor in Manila in June for a five-day goodwill visit amid improved relations between Russia and the Philippines.—NIÑO JESUS ORBETA

Defense Secretary Delfin Lorenzana is meeting with his Russian counterpart before the end of the week to explore future areas of cooperation and look at Russian-made military hardware, unperturbed by an American defense official’s warning on its possible ill effects on United States-Philippines relations.

Lorenzana, who is in Moscow on the invitation of Russian Defense Minister Sergey Shoygu, was considering further expanding the Philippines’ existing defense agreements with Russia to reciprocate Shoygu’s recent visit to Manila.

The Philippine’s Department of Defense (DND) currently has a personnel exchange arrangement with the Russian Ministry of Defense which was initiated in 2009 by then Defense Secretary Gilbert Teodoro.

In a short message to reporters late on Monday, Lorenzana said he was in Russia “to look at some defense equipment they are offering like submarines, helicopters.”

The defense secretary earlier named Russia as among the countries from where the Philippines might acquire its very first submarine.

Lorenzana left for Moscow on Thursday last week following his meeting with US Assistant Secretary of Defense for Asian and Pacific Security Affairs Randall Schriver.

Schriver, who was on a two-day visit in Manila last week,

had cautioned the Philippines against acquiring weapons systems and platforms from Russia.

“If they proceed with purchasing major Russian equipment, I don’t think that’s a helpful thing to the alliance,” Schriver said.

“I mean, let us understand the nature of this regime in Russia. I don’t need to go to

“So you are investing in not only platforms but making a statement about our relationship,” he said.