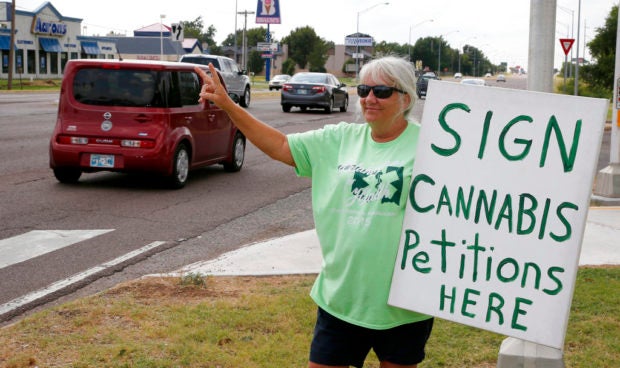 In this July 30, 2018 file photo, Zora Braun gestures to people as cars drive by a location in Oklahoma City where they can sign petitions for recreational marijuana and a constitutional amendment for medical marijuana. AP

Secretary of State James Williamson announced Monday that his office determined that supporters of the initiative gathered nearly 103,000 signatures for State Question 797 . The group needed more than 123,000 signatures for the proposed constitutional amendment to qualify for a public vote.

Supporters want to amend the constitution to allow adults over the age of 21 to legally use marijuana.

Williamson’s office sent a report on its findings to the Oklahoma Supreme Court, which will review the information and make a final decision on the group’s effort.