Suu Kyi says speed of Rohingya return is up to Bangladesh 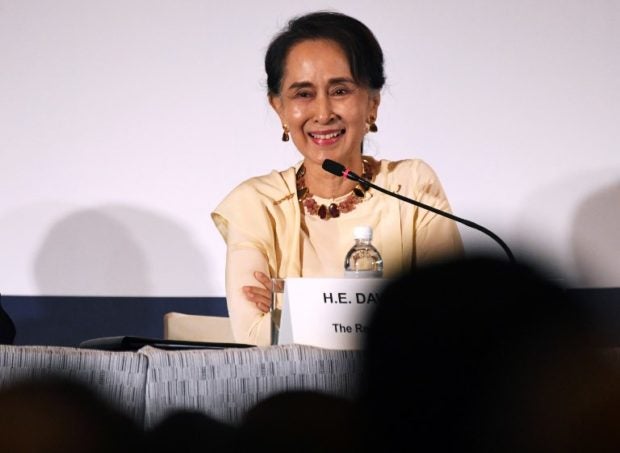 Aung San Suu Kyi said Tuesday it was up to Bangladesh to decide how quickly Rohingya refugees would return to Myanmar, appearing to blame Dhaka for the delay.

More than 700,000 Rohingya Muslims fled Buddhist-majority Myanmar to Bangladesh after a brutal military crackdown on the stateless minority almost a year ago.

The two countries last November signed a deal to repatriate them but it has stalled. Many fear returning to a place where villages were burned to the ground and where they say security forces murdered, tortured and raped members of their communities.

Bangladesh insists the Rohingya are on its soil temporarily but has not forced them back.

In rare public remarks on the crisis, civilian leader Suu Kyi said in a speech in Singapore that Myanmar has been ready to receive Rohingya returnees since January 23 as agreed in the memorandum of understanding.

“It’s very difficult for us to put a time frame on it by ourselves unilaterally because we have to work with Bangladesh in order to do that,” she told an audience in a lecture organized by the ISEAS-Yusof Ishak Institute and entitled “Myanmar’s Democratic Transition: Challenges and Way Forward.”

“Bangladesh would also have to decide how quickly they want the process to be completed,” Suu Kyi added.

Since the repatriation was signed the two countries have wrangled over details, including the way refugees are described on ID cards in Bangladesh.

Rohingya living in the crowded camps over the border in Cox’s Bazar insist on safety guarantees and citizenship rights before returning to Rakhine state in western Myanmar, where the United Nations says conditions are not ready for their return.

The US and UN have described the military’s campaign as ethnic cleansing and there is scepticism over whether Myanmar seriously intends to allow mass returns.

The crackdown against the Rohingya was sparked on August 25 last year when insurgents attacked police posts.

Calls have mounted for Myanmar’s military to be held responsible for the campaign, in which thousands are estimated to have died, and the US has sanctioned two army brigades and several commanders who oversaw the expulsion.

But Myanmar says it was simply defending itself and bristles at international calls for justice, arguing that the world does not understand the problem.

Suu Kyi, a Nobel laureate once under house arrest by the junta that ruled for decades, has seen her global reputation crumble since coming to power for failing to speak up for the Rohingya.

“We who are living through the transition in Myanmar view it differently from those who observe it from the outside and who will remain untouched from its outcome,” she said, appearing relaxed and jocular.

She also blamed Rohingya insurgents and avoided criticism of the military.

“The danger of terrorist activities which was the initial cause of events leading to the humanitarian crisis in Rakhine remains real and present today,” she said.

“Unless these security challenges are addressed, the risk of communal violence would remain.”

The Rohingya are seen as outsiders in Myanmar but consider Rakhine their homeland.

They were stripped of their citizenship decades ago and subject to periodic purges while denied access to healthcare and freedom of movement.