Lacson on making peace with GMA, winning without pork 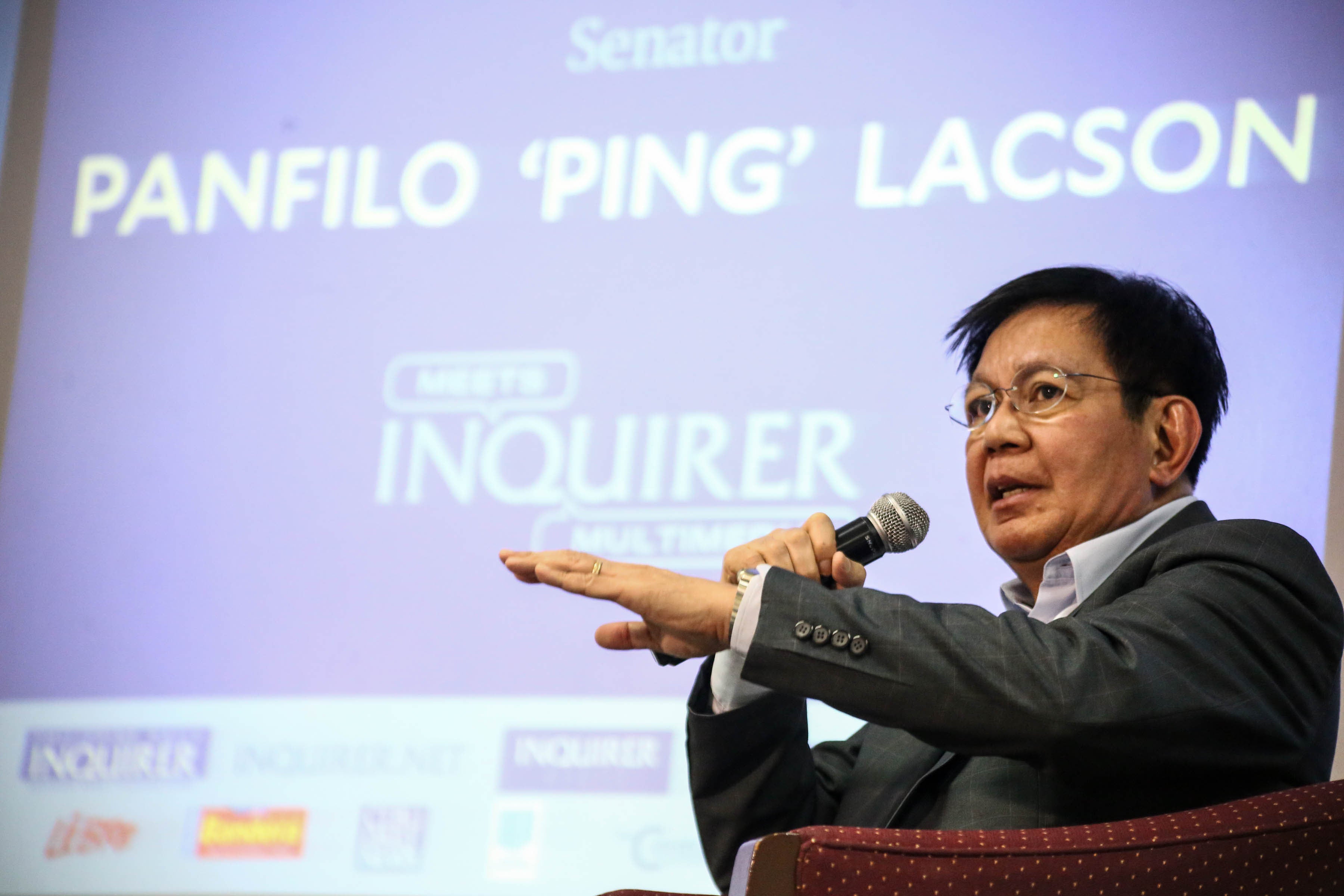 A firm handshake was what Sen. Panfilo “Ping” Lacson offered to make peace with former President and now Speaker Gloria Macapagal-Arroyo, whose administration he once accused of persecuting him.

Lacson said the occasion came last May when he and Arroyo sat down as members of the bicameral conference committee that was trying to reconcile the Senate and House versions of the national identification (ID) system. The senator headed the Senate panel, while Arroyo was a member of the House panel.

After the committee came up with a common version of the national ID, its members took a group photo to mark the occasion.

“(Arroyo) came forward, I met her and we shook hands. It was a warm handshake and it was genuine. It was sincere, at least on my part,” said the senator during last week’s Meet Inquirer Multimedia forum.

After almost two decades of feuding, Lacson said he now wanted to keep the peace with Arroyo, his old nemesis whose administration had accused him of being behind the November 2000 abduction and killing of publicist Salvador “Bubby” Dacer and his driver, Emmanuel Corbito.

Allegations of his involvement in the killing, made by a former subordinate, police Senior Supt. Cezar Mancao II, in January 2009 forced the senator, a former chief of the Philippine National Police, to slip out of the country in early 2010.

He disappeared shortly before a Manila judge ordered his arrest for the Dacer-Corbito ambush. He denied having any hand in the crime.

The Court of Appeals later junked the charges against Lacson, who resurfaced in 2011 after 13 months in hiding.

“We are now at peace with each other, but there’s no saying I will not also [criticize her] when [an issue] goes against my advocacy,” said the 70-year-old senator, Arroyo’s biggest critic who exposed alleged corruption in her administration.

Before becoming a senator and exposing corruption in government, such as the pork barrel allocations of lawmakers in the national budget, Lacson was a disciplinarian national police chief who was praised for, among other things, ordering all police officers to trim their bellies and going after “kotong” cops.

Lacson said he did not reinvent himself when he became a senator.

His statement came as a reply to a query posed by Inquirer columnist Ramon Farolan, himself a retired military general.

Lacson said he had learned to adapt to his new environment as a civilian but also never wavered from the teachings taught to cadets at the Philippine Military Academy (PMA).

Lacson said the PMA’s vow of courage, integrity and loyalty would remain in him as long as he lives.

To Farolan, a fellow PMAyer, Lacson said, “All right, sir, all right”—a phrase that covers the PMA cadet’s code of honor where a PMAyer does not lie, cheat, steal or condone those who do.

Asked how he could survive the crazy politics in the country, such as winning elections without his share of the pork barrel, Lacson said his secret was his campaign contributors.

He said these kindhearted supporters—“who I cannot remember anymore”—were people he had helped when he was still with the PNP.

Lacson, the former chief of the government’s main antikidnapping task force, admitted that people whom he had rescued offered money to him and his team in gratitude.

But he said he had made a stand then that policemen should not expect rewards since they were only doing their duty. He also did not want his men to become choosy in helping only people who could offer a reward.

When he first ran for the Senate, these people told him they wanted to help him out through contributions to his campaign, according to Lacson.

And that was why whenever he ran for office, these people contributed to his election campaign. “They know I don’t have pork barrel, so they help me,” Lacson said.

With the next presidential elections coming in four years, Lacson said he was not keen on running for the highest position in the land a second time. He ran for President in 2004 and lost to Arroyo.

“I’m more bored than excited [about it],” he said, admitting that the current political system is “very frustrating to say the least.”

Lacson likened the situation in the country to Sisyphus, the cruel king in Greek mythology who was punished by the gods to roll a massive boulder to the top of a steep hill forever.

Lacson admitted he felt titillated to hear people say he should succeed President Duterte, who ends his term in 2022.

“I guess it’s a question of fire in the belly,” he said, adding that for now he did not feel the excitement of going for the presidency this time around.