Trillanes says probe vs Calida to go on: ‘He is not a sacred cow’ | Inquirer News
Close
menu
search

Trillanes says probe vs Calida to go on: ‘He is not a sacred cow’ 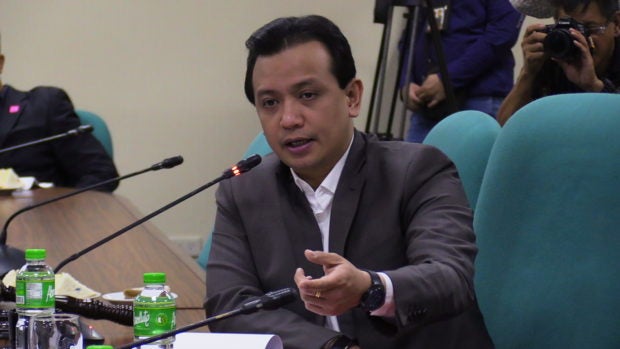 Senator Antonio Trillanes IV on Friday countered Solicitor General Jose Calida’s petition to block the Senate’s call for an investigation into his firms, stressing that the government’s principal lawyer is “not a sacred cow” and not immune from a legislative inquiry.

“Let me remind Mr. Calida that he is not a sacred cow. He does not have any immunity from any legislative inquiry. Thus, his petition for TRO (temporary restraining order) has no legal basis,” Trillanes said in a statement.

The staunch opposition senator said the investigation would continue no matter where Calida hides.

Calida and his family have asked the Supreme Court to scrap the Senate’s call for an investigation into his family-owned Vigilant Investigative and Security Agency Inc., and the government contracts it acquired.

In the petition, the Calida family asked the high court to nullify and declare as unconstitutional Trillanes’ August 1 letter of invitation to a Senate inquiry because it was “issued in respondent [Trillanes’] sole capacity only or without the authority of the Senate or any of its Committees and for serving no legislative purpose.”

The SC has instructed Trillanes to comment on Calida’s plea within 10 days from receipt of the high court’s order. /kga