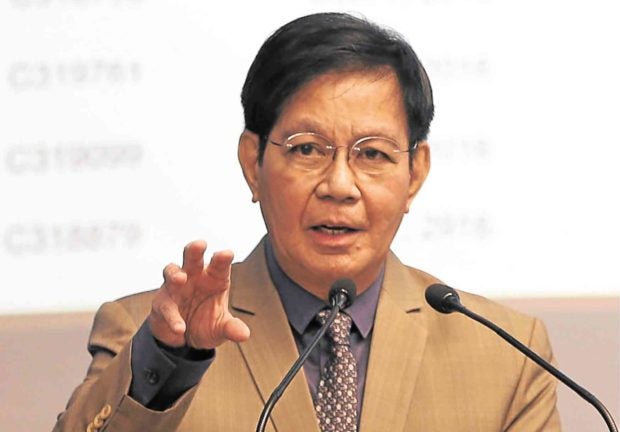 Despite recent news on police scalawags, Senator Panfilo Lacson said the Philippine National Police (PNP) is on the right track in pushing for its internal cleansing program.

Lacson said the sanctioned police allegedly involved in illegal activities are just the results of the PNP’s effort in implementing the cleansing program among its ranks.

“‘Yung (On the) renewed internal cleansing, they’re on the right track,” he said when sought for comment on the leadership among the police during the Meet the Inquirer forum Thursday.

Lacson said the PNP only has a renewed drive on internal cleansing, that’s why more police scalawags are now apprehended #MeetInquirer @inquirerdotnet

But even though he commended its program, Lacson advised the top leadership in the PNP to reangle the messaging on the apprehended police.

(You should highlight that the cops involved in kidnapping, extortion, and illegal drugs were sanctioned because you have a renewed drive.)

(This is not because the number of scalawags increased but because you have renewed efforts to expose and arrest them.)

Lacson also said Director General Oscar Albayalde came to his office before he assumed office as police chief and advised him to push for internal cleansing among the PNP.

“I think based on that basic guidance that I gave them, they’re really implementing an honest to goodness internal cleansing within the PNP, and that’s good,” the senator said.

He also advised Albayalde to “sustain” the police’s internal cleansing program, or else it would go to waste as scalawags will again prevail. /je