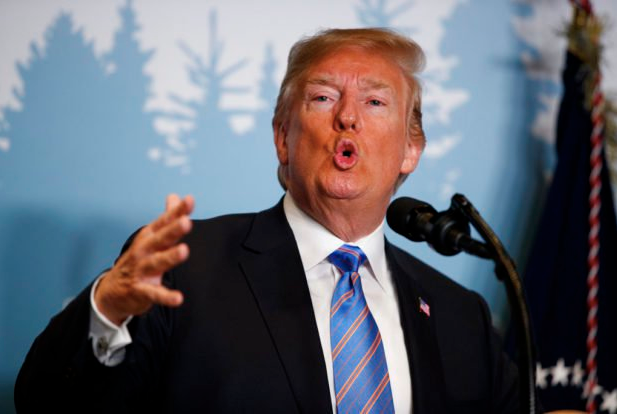 Washington, United States — President Donald Trump lashed out at his former “Apprentice” and White House aide Omarosa Manigault Newman on Tuesday in especially angry terms, slamming her as a “dog” and a “crazed, crying lowlife” as her tell-all book hit stores.

Manigault Newman — who first gained fame as a contestant on Trump’s reality TV show  The Apprentice — has dripped out recordings of embarrassing private conversations at the White House as she promotes a memoir about her time with “The Donald.”

Her book — which paints Trump as a racist, liar and a “germophobe” with a “total lack of empathy” — has plunged the White House and the President into fresh crisis, and her comments to the media have dominated US headlines for days.

Team Trump responded furiously, launching a campaign to discredit her and pursuing legal action against her for breaking an apparent non-disclosure agreement.

Trump had already branded “Omarosa” — as she is commonly known in America — a “lowlife” after she released a recording of her firing by chief of staff John Kelly, seemingly recorded in the White House Situation Room.

And after she released a recording of a conversation she had with Trump after her firing, he repeated called her “wacky.”

But on Tuesday, he ratcheted up the war of words — to a level of nastiness rarely seen, even from a president who has shown he does not pull punches when insulting his critics.

“When you give a crazed, crying lowlife a break, and give her a job at the White House, I guess it just didn’t work out. Good work by General Kelly for quickly firing that dog!” Trump tweeted.

His comment immediately prompted criticism on both sides of the political aisle.

“This kind of language is unbecoming of a President of the United States. There is no excuse for it, and Republicans should not be okay with it,” said Republican Senator Jeff Flake, a frequent Trump critic.

“How dare he? He has taken this country to its knees,” said Democratic congresswoman Frederica Wilson.

White House press secretary Sarah Sanders argued that Trump’s insults have nothing to do with race or gender.

“The President is an equal opportunity person that calls things like he sees it. He always fights fire with fire and doesn’t hold back on doing that across the board,” Sanders said. 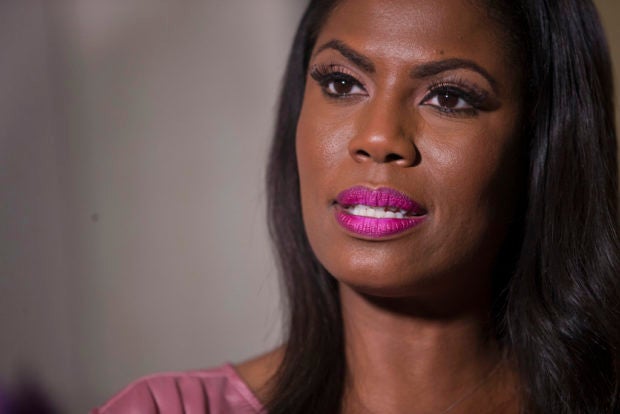 Television personality and former White House staffer Omarosa Manigault Newman speaks during an interview with The Associated Press, Tuesday, Aug. 14, 2018, in New York. Manigault Newman declared she “will not be silenced” by President Donald Trump, remaining defiant as her public feud with her former boss shifted from a war of words to a possible legal battle. (AP Photo/Mary Altaffer)

‘In Trump World, everyone lies’

The book and the recordings by the disgruntled 44-year-old Manigault Newman, once an ardent Trump ally, represents a stunning breach of presidential trust.

On Tuesday, she explained to CBS News why she made the recordings: “I’m the kind of person who covers her own back. In Trump World, everyone lies.”

“Everyone says one thing one day and they change their story the next day. I wanted to have this type of documentation… in the event I found myself in this position where, as you said, they’re questioning my credibility.”

Just how much she documented of her time in the White House is now of keen interest to her former colleagues and, perhaps, to special counsel Robert Mueller.

Manigault Newman said she had already spoken to the man who is looking into Russia’s interference in the 2016 presidential election and whether Team Trump colluded with Moscow to tip the scales. She also says she is willing to do so again.

Largely self-serving, it describes the daily firefighting of life on the Trump campaign and then in the White House.

“Donald Trump’s single greatest character flaw as a leader and human being is his complete and total lack of empathy,” she writes, describing the president as a “friend” but attacking him relentlessly.

“Nothing has more meaning to Donald than himself,” she says, alleging that he and his wife Melania sleep in separate rooms and that Trump has brought a tanning bed with him to the White House.

Perhaps the sternest criticism is of Trump’s abilities — Manigault Newman describes him as a brilliant businessman but “just this side of functionally illiterate,” prone to “forgetfulness and frustration” and in a state of “mental decline” that “could not be denied.”

Manigault Newman has suggested that Trump has been recorded using racial slurs — something Trump denies.

CBS News aired a recording of what appears to be her and other campaign aides hatching a plan to tamp down the damage if such a tape of Trump existed.

Katrina Pierson, one of those aides, told CNN Tuesday she had only entertained the possibility Trump uttered an epithet to placate Manigault Newman so she could move the conversation on.

Despite Trump’s denials, Sanders said she could not guarantee the president had never used racial slurs.