Los Angeles is first in US to install subway body scanners 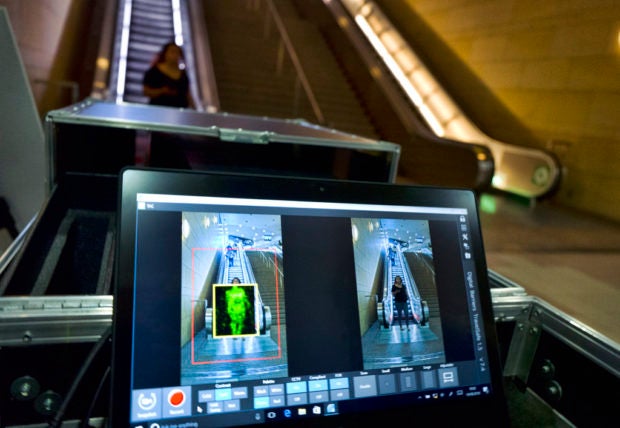 An arriving passenger to Union Station in Los Angeles is seen on the ThruVision technology that reveals suspicious objects on people during a Transportation Security Administration demonstration on Tuesday, Aug. 14, 2018. Los Angeles is poised to have the first mass transit system in the U.S. with body scanners that screen passengers for weapons and explosives. AP

The deployment of the portable scanners, which project waves to do full-body screenings of passengers walking through a station without slowing them down, will happen in the coming months, said Alex Wiggins, who runs the Los Angeles County Metropolitan Transportation Authority’s law enforcement division.

The machines scan for metallic and non-metallic objects on a person’s body, can detect suspicious items from 30 feet (9 meters) away and have the capability of scanning more than 2,000 passengers per hour.

On Tuesday, Pekoske and other officials demonstrated the new machines, which are being purchased from Thruvision, which is headquartered in the United Kingdom.

In addition to the Thruvision scanners, the agency is also planning to purchase other body scanners — which resemble white television cameras on tripods — that have the ability to move around and hone in on specific people and angles, Wiggins said.

“We really want to be effective and we need the ability to have a fixed field of view, but we also need to be able to move that field of view as necessary,” Wiggins said. “Deploying these technologies together gives us that accuracy and minimizes any delays.”

Wiggins would not say how many of the machines were being purchased, but said they would be rolled out in subway stations in the “coming months.” Employees and police officers first have to be trained on how to use the equipment.

Signs will be posted at stations warning passengers they are subject to body scanner screening. The screening process is voluntary, Wiggins said, but customers who choose not to be screened won’t be able to ride on the subway.

But some passengers saw the screening as an added layer of security.

“I guess it is a good, precautionary thing,” Andrea Kirsh said, a 22-year-old student from Corvallis, Oregon, who was traveling through Los Angeles’ Union Station on Tuesday. “It makes me feel safe. As a civilian I think we often don’t know what to look for or what we would be looking for.”

Passengers who rode down an escalator to ride the Metro Red Line at Union Station in Los Angeles on Tuesday were screened as Pekoske and other officials looked on. But after the news conference and media demonstration, officials packed up the equipment and carted it off.

The TSA tested body scanners in New York’s Penn Station in February and has also conducted tests at Union Station in Washington, D.C., and at a New Jersey Transit station during the 2014 Super Bowl.

In December, a Bangladeshi immigrant injured himself by setting off a crude pipe bomb strapped to his chest in a subway passageway near Times Square in New York City.

Metro has previously tested several different types of body scanners, including airport-style screening systems where passengers walk through a scanner. The pilot program was meant to evaluate the accuracy and capacity of the portable machines.