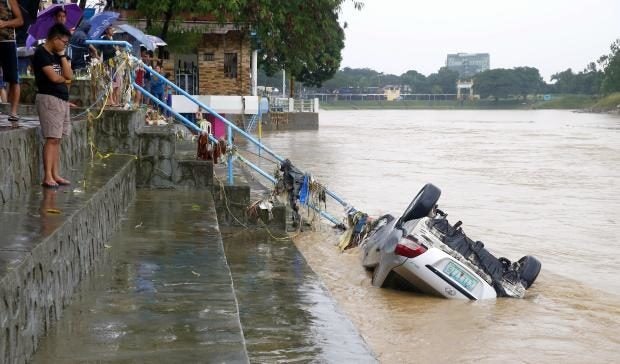 Residents watch as a car rests by the riverbank after being swept by floodwaters overnight Sunday, Aug. 12, 2018. (Photo by BULLIT MARQUEZ / AP)

DAVAO CITY — The Davao City government will extend financial aid of P1 million to Marikina City, its sister city, which was severely hit by flooding caused by heavy rainfall due to the southwest monsoon aggravated by Tropical Storm Karding last week.

The City Council approved the financial aid on Tuesday

“The money is intended to help residents of the 10 barangays affected by the massive flooding,” the city Public Information Office here reported.

“Mayor Inday Sara Duterte asked the City Council to give her the authority to utilize a portion of the Quick Response Fund of the city to help Marikina City, which happens to be our sister city,” Vice Mayor Bernard Al-ag said.

“The City of Davao has always been willing to help other cities or provinces in casea of calamities. Mayor Inday has always been quick to give assistance to those in need,” Al-ag added.

Over 3,000 families were displaced when the Marikina River to overflow. Flooding reached third alarm on Sunday, prompting 16,349 people to leave their houses.

Since January this year, the city has extended financial help to 11 different cities and provinces due to calamities. Inquirer Mindanao