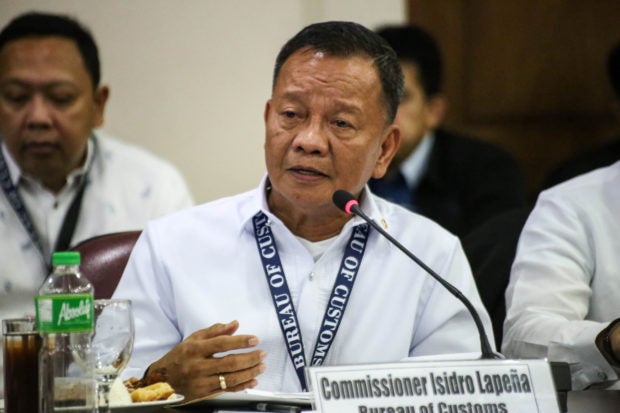 It’s the word of the Bureau of Customs (BOC) against that of the Philippine Drug Enforcement Agency (PDEA).

The BOC on Tuesday disputed PDEA’s report that 1 ton of “shabu” (crystal meth) worth P6.8 billion entered the country right under its nose.

“This yielded negative result for the presence of dangerous drugs,” he said, adding that speculation of drugs flooding the local market “has no basis.”

Later during the hearing, Lapeña declared: “The empty containers did not contain the one ton of shabu.”

“To correct the misinformation, it is only fair for the Bureau of Customs that the PDEA should issue a recantation of the previous news report,” Suansing said.

“It was made to appear that they [BOC personnel] are again the culprit . . . It is unfair for [Lapeña’s] administration to say some [drugs] went through,” he added.

Ruel Lasala, PDEA deputy director general for operations, insisted that “circumstantial evidence” pointed to the likelihood that the lifters had contained drugs.

Asked by Marikina Rep. Miro Quimbo if the agency was willing to admit that it made a mistake, Lasala stuck to his guns.

“We are saying, Sir, that all the circumstantial evidence we have gathered [indicate that] the contents of the metallic lifters were drugs, Sir,” he said.

Lasala noted statements of witnesses that several Chinese went to the warehouse to pick up the contents of the lifters and shut out its workers, apparently because the Chinese did not want the cargo to be seen.

He said similar circumstances surrounded the four empty lifters in Cavite discovered on Aug. 8 and two abandoned lifters at the port of Manila, from which P4.3 billion worth of shabu was seized on Aug. 7.

For one, drug-sniffing dogs reacted to both sets of lifters in similar ways, by “sitting” in response to the odor of drugs.

Both sets of lifters had the same consignee and that the addresses were indicated to be in General Mariano Alvarez town, he said.

The lifters were also packaged in aluminum foil and asbestos fibers to prevent the leakage of “even one granule.”

Asked by Magdalo Rep. Gary Alejano if the drugs could evade detection by a swab test, Lasala said: “There’s a possibility, Sir . . . The way it was wrapped, it seems that not one residue may fall out of the package.”

He admitted though that the case would be “problematic” to pursue because the alleged drugs—the “body of the crime”—was missing.

Amid the conflicting claims, Malacañang told the National Bureau of Investigation to conduct its own probe.

Executive Secretary Salvador Medialdea issued the directive to the NBI on Monday, according to presidential spokesperson Harry Roque.

The Palace said it did not take as “gospel truth” the speculation that a ton of shabu was already circulating in the country.

At the House hearing, Quimbo questioned Lapeña if he contradicted the PDEA because the agency he once headed “is putting you in a bad light.”

The customs chief, however, said he was responding to “the clamor of the men and women of the Bureau of Customs that I have to come out and tell what is the truth.”

“The last thing we need is finger-pointing between agencies. Tell us an explanation why it’s not a duck,” he told Lapeña.

Lapeña said the BOC investigation was still ongoing and it was “cooperating fully with the PDEA.”

This was not the first time that illegal drugs was alleged to have slipped past the BOC’s screening of shipments despite the Duterte administration’s war on drugs.

In May last year, P6.4 billion worth of shabu from China cleared the BOC’s lowest level of scrutiny and was later seized at a Valenzuela City warehouse in a raid criticized for procedural defects.

The smuggling, which took place when the BOC was headed by Nicanor Faeldon, prompted an overhaul of the bureau’s mechanisms and his replacement by Lapeña. —WITH A REPORT FROM JULIE M. AURELIO