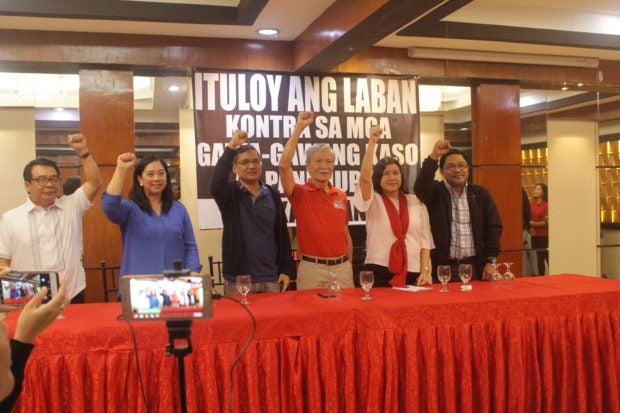 Former lawmakers raise their clenched fist together during a news conference in Quezon City.  PHOTO by Gabriel Pabico Lalu/INQUIRER.net

Former lawmakers were careful not to link the revival of a 10-year old case against them to Speaker Gloria Macapagal-Arroyo’s rise to power, but said that the alleged “trumped-up” charges would have not been resurrected if not for the former president.

“If I may be categorical about it, sa ngayon hindi natin masasabi na si GMA ang nasa likod ng muling pagbuhay ng kaso (as of now we cannot say that Gloria Macapagal-Arroyo is behind the case’s revival), but definitely, she was behind the initial filing,” former Bayan Muna representative Teddy Casiño said in a press briefing on Tuesday.

(This proves that the institutions and agencies as well as the mindset that prevail during the time of Gloria are still there.)

Former Gabriela representative and incumbent Anti-Poverty Secretary Liza Maza shared Casiño’s sentiments, saying that the public should keep an eye on these cases, some of which have been resolved.

She said it is worth looking into why the murder case against them was revived in the first place.

(This means that there are conditions that allow this to happen, there are operators, structures and procedures, which may be unspoken at this time but boils down to harassment of activists.)

The case was for the murder of Bayan Muna detractors in the said city.  However, Cabanatuan RTC granted the group’s motion on Monday to junk the case, which effectively voided the arrest order. /ee

Ocampo said, however, that while there is no substantial evidence linking Macapagal-Arroyo to the revived case, he does not discount the possibility that she had a hand in it.

(We are not ruling out the possibility…we know how Gloria Macapagal-Arroyo operates and her people are still around, as well as the the military officers who served under her.)

“I know her, I personally know her, ‘yong pagka-vindicitive niya ay maaring coincidence pero nandyan (her vindictiveness may be coincidence but it’s there),” he added, referring to the time when he and Mariano worked with the Speaker when she was still the vice president. /ee