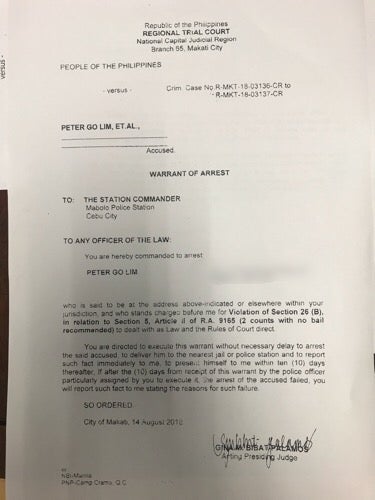 The Makati City Regional Trial Court has already ordered the arrest of Cebu-based businessman Peter Lim who is accused of violating the Comprehensive Dangerous Drugs Act of 2002.

Lim, together with self-confessed drug distributor Kerwin Espinosa, Marcelo Adorco, and Ruel Malindagan, is accused of violating Section 26 (B) in relation to Section 5, Article II (conspiracy to commit illegal drug trading) of Republic Act No. 9165, a non-bailable offense.

Also subject of the arrest order is Ruel Malindagan who is currently at large.

“You are directed to execute this warrant without necessary delay to arrest the said accused to deliver him to the nearest jail or police station,” the court said in the arrest order sent to the Cebu City police.

Bibat-Palamos gave the authorities 10 days to implement the arrest order and present Lim before the court.

After 10 days and Lim remains at large, the court said “you will report such fact to me stating the reasons for such failure.”

In a separate order, the court set a hearing on the Department of Justice’s (DOJ) request to issue a hold departure order for Lim and his co-accused. The hearing is set on Aug. 17.

The DOJ indicted Lim last Aug. 10 after finding probable cause in the complaint filed by the PNP-CIDG, which was earlier dismissed by a previous panel of prosecutors.

The new panel chaired by Senior Associate State Prosecutor Juan Pedro Navera cited as evidence Espinosa’s confession at the Senate—the transcript of which was submitted to the investigating prosecutors for the new probe—and Adorco’s positive identification of Lim.

The DOJ cited as the most serious part of allegation in the charge of conspiracy to commit illegal drug trading is the “agreement to trade in drugs” as it rejected the claim of Lim that he could not be held criminally liable in the absence of illegal drugs as evidence.

“The drugs themselves as corpus delicti (body of crime) of drug trading are not essential under Section 26(b) of the law,” the DOJ added.

The panel also said Lim’s defense is that he is not “Jaguar.” The businessman said that he even presented himself before the National Bureau of Investigation earlier to clear his name.

But the panel said that Lim’s defense is “immaterial” as he was positively identified by Adorco and Espinosa. /je