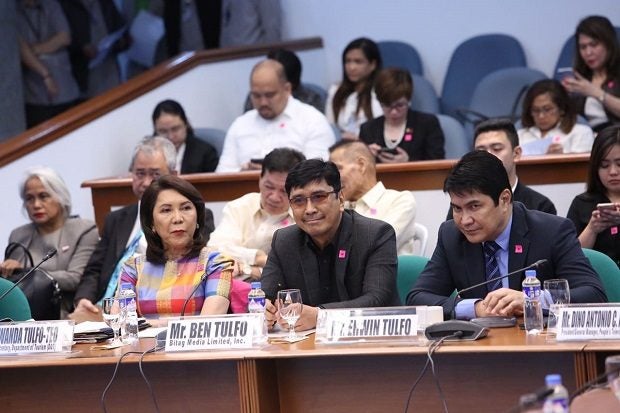 Siblings (foreground, from left) Wanda Tulfo-Teo, Ben Tulfo and Erwin Tulfo at a Senate hearing on August 14, 2018. The Senate Blue Ribbon Committee investigated allegations of corruption in the P60-million ad deal between the Department of Tourism, which was headed by Tulfo-Teo, and her brother’s media outfit. PHILIPPINE DAILY INQUIRER / MARIANNE BERMUDEZ

Former Tourism Secretary Wanda Tulfo-Teo branded on Tuesday as “incredible” all allegations hurled at her in connection with the P60 million advertisement deal with government-run PTV 4.

Tulfo-Teo faced the Senate blue ribbon committee for the first time to deny any irregularities in the ad deal.

“For quite some time, I have kept mum against all the incredible allegations,” she said in her opening statement.

“I have been defamed, maligned and worse, crucified by allegations of corruptions and competence, all made up to look as truth,” she lamented.

But the former official maintained that the ad deal between the Department of Tourism (DOT) during her time and PTV 4 had gone through proper channels.

“With confidence, I can say that there’s nothing illegal in the said contract,” she said.

“The transaction was between DOT and PTV- 4. It’s a government to government contract within the executive department and all payments were paid directly to PTV-4,” Tulfo-Teo pointed out.

The Commission on Audit earlier reported that in 2017, DOT then being headed by Tulfo-Teo placed the P60 million ad deal to a pTV-4 show by her brother, Ben Tulfo, and cohosted by another brother, Erwin Tulfo.

The ad deal, COA said, was without documents showing the payments were valid and legal. /cbb