Senate can do charter change after 2019 polls – Villar | Inquirer News

Senate can do charter change after 2019 polls – Villar 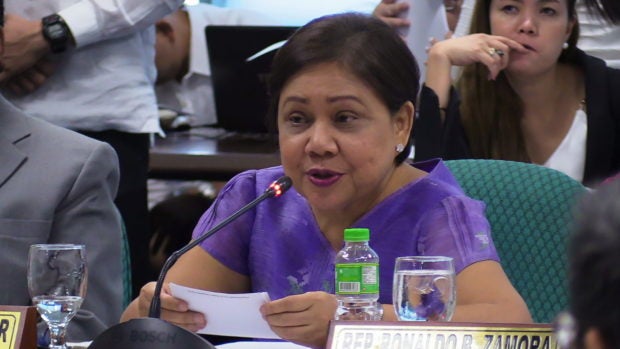 Proadministration Sen. Cynthia Villar on Monday said the Senate would not tackle charter change until after the 2019 midterm elections, despite Malacañang’s assertions last week that the country’s shift to federalism remained a top priority of President Rodrigo Duterte.

“It will be difficult for us to act on charter change. We will not have enough time,” said Villar, delivering another blow to federalism’s momentum following warnings by two Cabinet officials last week that changing the form of government at this time could wreak havoc on the country’s economy.

Speaking to reporters in Parañaque City, where her Nacionalista Party formalized an alliance with Davao-based party Hugpong ng Pagbabago, Villar said the senators’ primary focus would likely be their campaign for reelection next year.

“You know how it is. During the campaign period, there are no people in the Senate and even in the House of Representatives,” Villar said.

Local business groups also worried about the consequences of the proposed shift to federalism, echoing the woes expressed by Dominguez and Pernia.

In a statement on Sunday, seven business chambers called for “full, open and dispassionate dialogues” on federalism, a move that they said would have far-reaching effects on the country and its future.

“We encourage full, open and dispassionate dialogues on this proposed shift in the form of government, keeping in mind its long-term impact on future generations of Filipinos,” they said in a statement.

As this developed, the Palace on Monday said the President had spoken to his economic team and was listening to them, but believed that their concerns were “not insurmountable.”

“[The President] is now aware of these concerns and he has said that it’s not insurmountable. This can be studied and solutions can be proposed here. This is not a complete obstacle to Charter change toward federalism,” presidential spokesperson Harry Roque said.