For Marikina evacuees, leaving pets behind is not an option 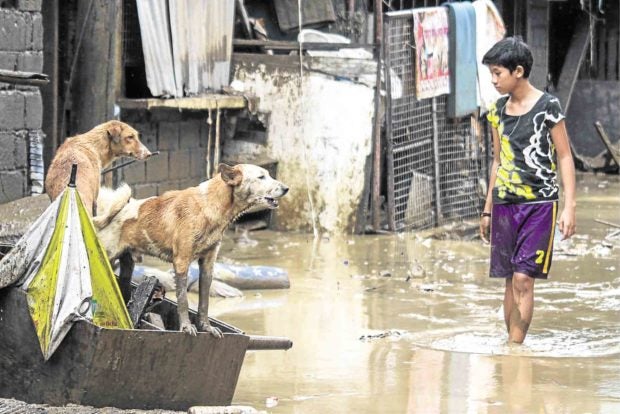 When murky floodwaters began to rapidly rise inside her house at Barangay Tumana, Marikina City, on Saturday, Julie Gercayer did not waste time gathering her family and fleeing to the nearest evacuation center.

Along with a handful of clothes and other belongings, the single mother and her four children also carried two of their most prized possessions – their dogs, Jack and Choo-choo.

For Gercayer, leaving the two dogs behind was never an option.

“They are part of our family. I can’t bear to leave them,” the 39-year-old massage therapist told the Inquirer on Monday inside the evacuation site at H. Bautista Elementary School.

“Even though they can’t speak, I know they also feel afraid and hungry, just like us,” she said.

In just a couple of hours on Saturday, heavy monsoon rains lashed Metro Manila and nearby provinces, bringing floods to many areas.

By Monday morning, there were over 3,600 people, mostly from Barangay Tumana, one of Marikina City’s most flood-prone areas.

Here, Jack and Choo-choo joined around 20 other dogs, whom their owners had also saved from rising floodwaters.

Marikina City is no stranger to disasters, having been devastated by Tropical Storm “Ondoy” in September 2009.

Government officials and residents said their experiences then taught them more about disaster preparedness and response, including caring for pets.

Even before people were forcibly evacuated, the Marikina government distributed at least 10 collapsible dog cages to over 20 evacuation centers in the city. 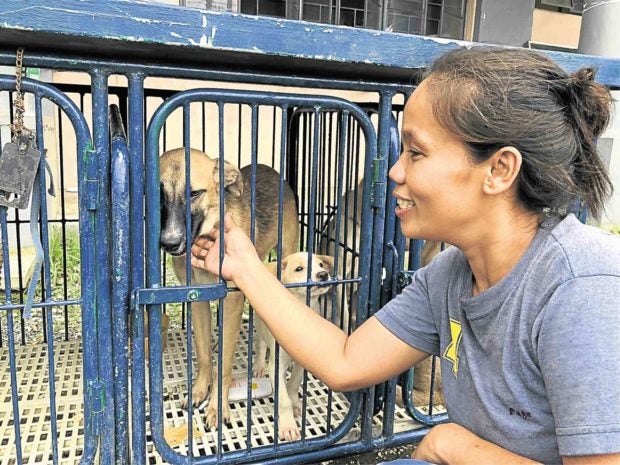 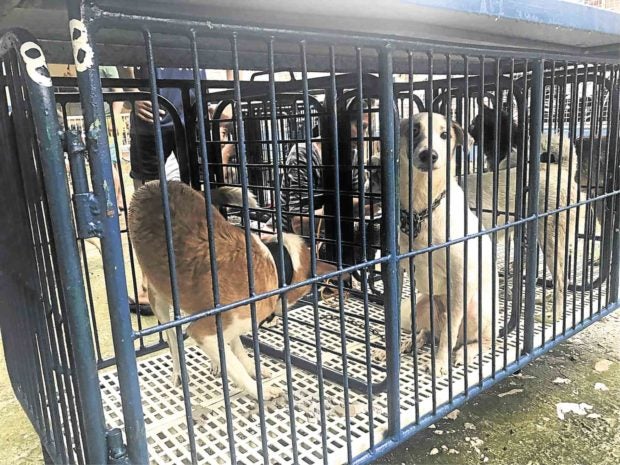 MAN’S BEST FRIEND Dogs fend for themselves on a flooded street in Cainta, Rizal, (topmost photo), while at an evacuation center in Marikina City, they are housed in separate cages. Julie Gercayer (upper photo) says she considers her dogs, Jack and Choo-choo, part of the family. —JAM STA ROSA AND JHESSET O. ENANO

“Before, people would bring their dogs inside the classrooms in the evacuation centers,” Manuel Carlos, head of the city veterinary office, told the Inquirer. “With the cages, we can avoid the spread of diseases among dogs and their owners, and also keep them secure.”

Personnel of the city veterinary office regularly visit evacuation sites to check on animals and also conduct rescues of stranded or lost pets.

“After Ondoy, we distributed flyers to inform residents on how to care for their pets during the rainy season,” Carlos said. “People here are aware, because we already include pets in our disaster preparedness programs.”

As the local government turned its focus to relief and rehabilitation efforts, Carlos now heads the preparation of hot meals to be distributed to over 20,000 evacuees across the city. He noted that also included in the head count for meal preparation were the rescued pets.

At the Marikina Sports Center, the center of the relief operations, hundreds of volunteers from different cities were busy cooking rice and various viands, from adobo to “caldereta.”

“We don’t distribute dog food because most of these pets are from areas where they are not usually fed with that,” Carlos said. “In our experience, we know that the families will share whatever they have with their pets, no matter how little.”

This sentiment was not lost on Gercayer, whose children have been continuously checking on their furry friends and giving them a portion of their rationed meals.

“They tell me: Ma, don’t forget about Jack and Choo-choo. They also have to eat,” she said. “We may have lost many of our things, but at least, we still have them.”