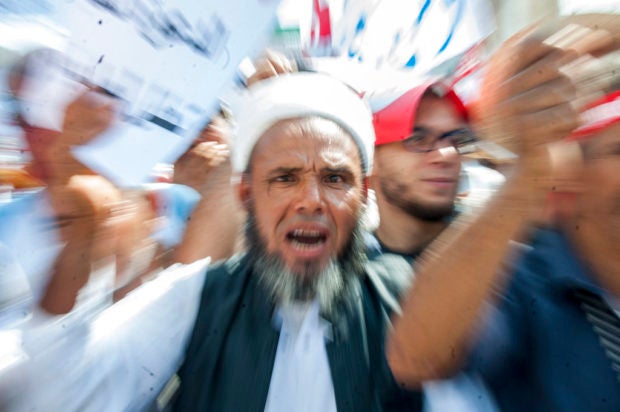 A man shouts during a demonstration in Tunis, Saturday Aug 11, 2018. Thousands of Muslim fundamentalists have held an hours-long protest in front of the nation’s parliament to decry proposals in a government report on gender equality. AP

BARDO, Tunisia — Thousands of Muslim fundamentalists protested Saturday in front of the nation’s parliament to decry proposals in a government report on gender equality that they claim are contrary to Islam.

Men and veiled women marched under a blazing sun from Tunis to Bardo, outside the capital where the parliament is located, to protest the report by the Commission of Individual Liberties and Equality. The report, among other things, calls for legalizing homosexuality and giving the sexes equal inheritance rights.

Security was heavy during the protest, which remained calm despite the anger the report has triggered. The crowd, who came from towns around Tunisia, cried out “Allahu akbar (God is great)” as they marched.

The protest was organized by the National Coordination for the Defense of the Quran, the Constitution and Equitable Development.

The commission was put in place a year ago by President Beji Caid Essebsi, who is expected to speak about it on Monday, Women’s Day in Tunisia. It was not immediately clear whether the proposals would eventually be put before parliament.

The North African nation has, since its independence from France in 1956, been a standard-bearer in the Muslim world for women’s rights. But the proposals in the 300-page report, known as the Colibe report, would take human rights, including women’s rights, to another level. It proposes to end the death penalty and legalize homosexuality, which the current penal code outlaws and punishes with three years in prison.

The equal inheritance proposal is an abrupt change from current practices, which see males in a family receiving double the inheritance of females.

The topics touching on sensitive areas have riled Muslims who embrace a literal reading of the Quran, the Muslim holy book.

“I’m here to defend the word of God and oppose any projects that harm the Islamic identity of our people,” said Kamel Raissi, a 65-year-old retiree.

“We totally reject the Colibe report which contains an underhanded hate for Islam,” said Abdellatif Oueslati, a nurse from Jendouba, 155 kilometers (95 miles) west of Tunis.

The authors of the report say the proposals conform with the nation’s 2014 Constitution and international human rights obligations.

“They in no way contravene Islamic precepts, but embody an enlightened reading of these precepts, which put them in step with the evolution of society,” said Abdelmajid Charfi, a university professor who is one of the report’s authors.

Protesters at Saturday’s rally were not convinced.

Tarek Azouz worried that the proposals amounted to a “wish to destroy moral values” by legalizing homosexuality. If acted upon, he said, “we’ll end up with gay marriage.” /cbb