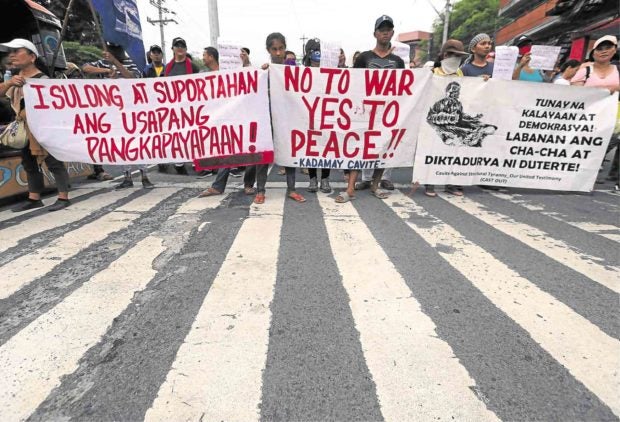 Militant groups call for peace talks to resume during a rally near Malacañang on Don Chino Roces Bridge in Manila in June. LYN RILLON

Twenty one members of the House of Representatives, led by the Makabayan party-list bloc, on Friday called on the Duterte administration to return to the negotiating table with the National Democratic Front of the Philippines, representing communist rebels.

The group submitted proposed House Resolution No. 2065 on the heels of the attack allegedly mounted by the Communist Party of the Philippines’ (CPP) armed wing, New People’s Army (NPA), on a police station in Lapinig, Northern Samar.

The legislators also urged their colleagues to investigate the delay in the fifth round of peace negotiations between the government and the communist rebels.

“As representatives of the people, [we] are duty-bound to express the sentiments and interests of their constituents for the immediate resumption of the stalled peace talks,” a portion of the resolution read.

The Makabayan legislators, headed by Bayan Muna Rep. Carlos Zarate, said the resolution was proposed 20 years after the Philippine government signed the Comprehensive Agreement on Respect for Human Rights and International Humanitarian Law with rebel negotiators.

One of those on the list, Victoria Tauli-Corpuz, UN special rapporteur on the rights of indigenous peoples (IPs), asked Mr. Duterte to withdraw the terror list because it puts people’s lives in danger.

“It creates a situation of insecurity for all those whose names are found on the list,” Corpuz said.

The names of Corpuz, a Kankanaey, and Molintas, an Ibaloi expert on IP rights, were dropped from the list this week after they filed a petition in court and proved they had no affiliation with underground communist groups like CPP and NPA.

“But what about the others who have no legal representation?” Corpuz said. “That’s just the tip of the iceberg. The bigger reality is that there are many people who suffer and yet they have no access to justice,” she said.

“I really feel that there has to be a massive campaign, awareness, about this phenomenon, to call on the government to stop criminalizing people who are only asserting their rights,” Corpuz added.

“This kind of action has to be criticized strongly because it really violates the human rights and fundamental freedom of every Filipino,” she said. —With a report from Jodee A. Agoncillo