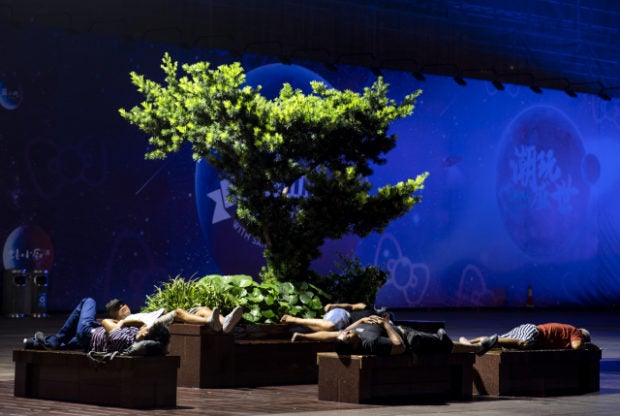 In this photo taken late on August 8, 2018, men sleep on benches along Nanjing East Road, a popular pedestrian street filled with shoppers and tourists during the day, to escape the heat of residential apartments in Shanghai. Image: Johannes Eisele/AFP

As Shanghai swelters under a summer heat wave, it sometimes looks as if people are dropping dead from the torrid temperatures on the city’s best-known shopping avenue.

Normally bustling Nanjing East Road has turned into an open-air slumber party on recent nights as local residents try to escape the heat of their cramped nearby homes by sleeping outside on benches or directly on the pavement.

The city of more than 24 million people has endured an extended hot spell over recent weeks, with temperatures on Thursday topping 35 degrees Celsius (95 degrees Fahrenheit) for the 16th day this summer.

Many homes in some of Shanghai’s low-rise older neighbourhoods lack air conditioning, while residents that do have it will often seek ways to keep electricity bills from skyrocketing during summer.

Around 4 am on Thursday nearly 100 people — including women and children, but mostly bare-chested men — were seen sleeping out on sidewalks normally crowded with shoppers and tourists during the daytime.

Dozing upon newspapers, blankets, or nothing at all, they sought relief from a night breeze blowing off the Huangpu River, which flows through the city centre and includes the famed Bund financial district.

Some bivouacked in nearby People’s Square — Shanghai’s main park — or snored while curled up outside clothing-store windows as mannequins stood guard inside.

For a number of men, the night’s bed was no more than a flat stretch of pavement, shirt and shoes off, with a large bottle of water and a Chinese bun placed nearby for breakfast.

Shanghai residents are known for flocking to subway stations, shopping malls, libraries, and supermarkets to escape the heat.

Outlets of Swedish retailer IKEA are particularly popular with overheated visitors, who come to nap on sofas and beds in its air-conditioned showroom.

Shanghai is getting hotter, logging a new record high of 40.9 degrees in July of last year, and eight of the 12 highest temperatures reached over the past century were hit only in the last five years, according to the city weather bureau. MKH