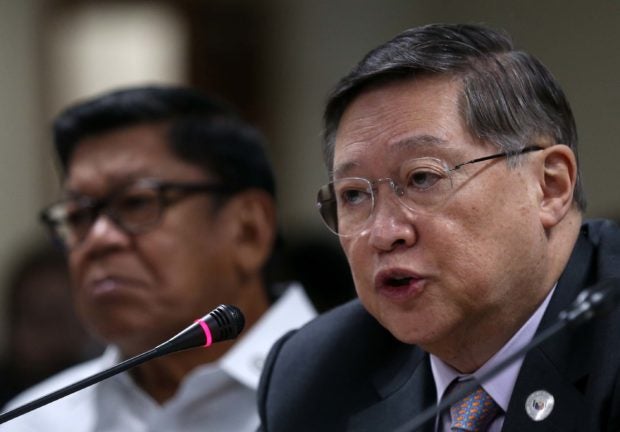 “The possible repercussions could result in dire, irreversible economic consequences,” Dominguez said in a statement on Friday.

Dominguez explained that “to avoid this negative economic consequence and maintain the current deficit target of 3 percent, the federal government will have to cut its expenditure program by P560 billion.”

“This means the national government may have to lay off 95 percent of its employees, or reduce the funds for its ‘Build, Build, Build’ program by 70 percent, or a combination of both,” he said.

The Department of Finance (DOF) chief said that while he and the economic team were not against federalism, the “ambiguous and unclear” fiscal provisions of the draft federal Constitution should be addressed.

“We welcome a discussion on the draft so that it is clear and unambiguous. We do not want the revenue assignment and the expenditure assignment to be misunderstood,” Dominguez said.

If the fiscal provisions set forth in the draft Charter were to be implemented, “the federal government would incur a deficit of 6.7 percent, which may result in a credit rating downgrade for the Philippines,” and, subsequently, higher interest rates, the official added.

According to the Department of Budget and Management, there are currently 1.46 million employees in the national government.

Under the “Build, Build, Build” program, the government plans to roll out 75 “game-changing” flagship projects while spending up to P9 trillion on hard and modern infrastructure until 2022, to usher in what it called the “golden age of infrastructure.”

At the Senate finance committee hearing on the proposed 2019 national budget on Wednesday, Dominguez said the country’s investment-grade credit ratings, which makes it cheaper for the country to borrow money, may “go to hell” while interest rates could rise by up to 6 percent under the “very confusing” fiscal provisions of the draft federal Constitution.

Credit ratings are a measure of a government’s creditworthiness. As the stability of state finances is also related to a country’s performance, credit scores serve as a proxy grade for the economy.

Dominguez’s remarks at the hearing prompted Fr. Ranhilio Aquino, a member of the consultative committee that drafted the Charter, to call for the dismissal of both the DOF chief and Socioeconomic Planning Secretary Ernesto Pernia, who also expressed apprehensions over the fiscal provisions.

In a Facebook post on Thursday, Aquino, dean of San Beda Graduate School of Law, said: “If (President Duterte) favors federalism, let him sack Dominguez and Pernia or command them to keep their traps shut.”

Dominguez shrugged off Aquino’s suggestion. “We respect the opinion of Father Aquino, but we believe that such attitude would not enrich the level of discourse on the proposed Constitution.”

Malacañang remained mum on Aquino’s call, with presidential spokesperson Harry Roque saying on Friday that the Palace “views the differences of opinion on federalism as part of the continuing discourse among members of the President’s official family.” —WITH A REPORT FROM JULIE M. AURELIO