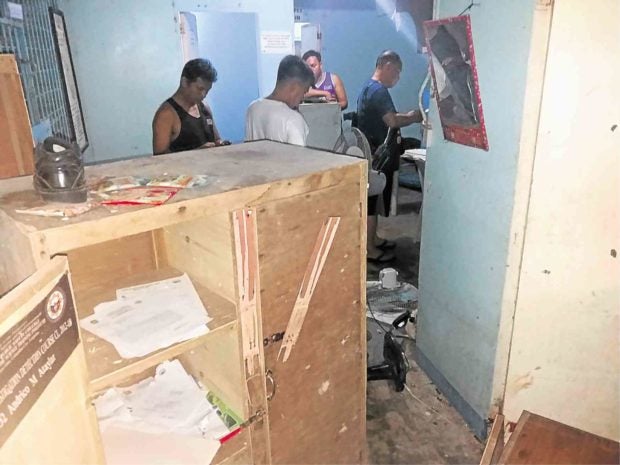 Police believed the attack was in retaliation to the arrest of Marietta Bartolo, a suspected NPA leader, in Catarman town. Bartolo is facing 10 murder and frustrated murder cases in different courts in Northern Samar.

At least 50 NPA rebels in two dump trucks and two motorcycles barged into the station 1:44 a.m. on Friday.

Although outnumbered, the four policemen manning the station fired at the attackers that led to a 30-minute gunfight.

Former Lapinig Mayor Romualdo Menzon, whose wife Luisa is the incumbent mayor, said the bursts of gunfire roused them from sleep.

“The attack was so ferocious that we could really hear the [heavy gunfire],” Menzon, whose house was about 600 meters from the police station, told the Inquirer by telephone.

PO2 Jerry Quilecol and PO1 Elizon Aguirre were wounded in the firefight. They were taken to Gamay District Hospital in Gamay town, where doctors declared them to be in stable condition.

Insp. Noli Montibon, Lapinig police chief, and PO2 Mark Mejedo retreated and hid in a nearby mangrove patch after they ran out of bullets.

The rebels ransacked the police station, which was at the back of the town hall in Barangay del Norte. Lapinig is about 70 kilometers from this capital town.

The rebels took two handguns, as well as laptops and desktop computers from one of the offices at the municipal hall, Montibon said.

Menzon said security had been tightened, with the Northern Samar provincial police and the Army’s 20th Infantry Battalion, based in Catubig town, sending more men to Lapinig.

The NPA leader was reportedly scheduled to attend an arraignment at a court in Gamay when the attack in Lapinig happened.

“We do not know what’s on their (rebels’) mind. They might have planned to rescue Ka Tayang (Bartolo) … but were not able to do so because the suspect was well guarded,” said Tayaban.

He said Bartolo was not detained in Lapinig but at the Bureau of Jail Management and Penology facility in Catarman.

In Mindanao, the NPA said a soldier was killed, while another was wounded in a clash in Bukidnon province on Wednesday.

Ka Malem Mabini, spokesperson for the NPA North Central Mindanao Command, said the firefight erupted at the village of Bontongon in Impasug-ong after the NPA’s Front 89 launched what it called “harassment” operations against government forces.

The military, however, denied the NPA claim, saying an NPA fighter was killed in the clash. It, however, confirmed that a soldier was wounded. —WITH A REPORT FROM KARLOS MANLUPIG