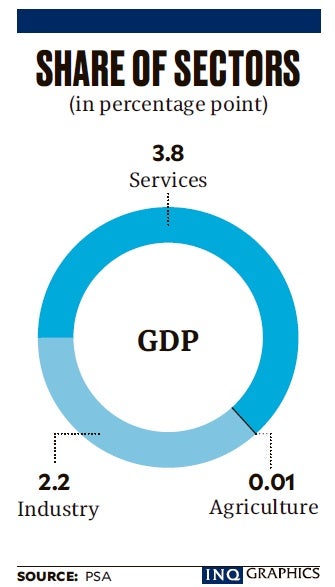 The closure of Boracay, high prices and tighter mining regulations weighed down the country’s economic expansion in the second quarter to 6 percent year-on-year, or below expectations, the government’s top economist said on Thursday.

The growth in the gross domestic product (GDP) in April-June was the weakest in three years, ending a run of 10 consecutive quarters in which the economy grew at least 6.5 percent.

GDP is the value of goods produced and services rendered in a given period.

Malacañang, however, is not about to panic over the slightly lower growth.

“I don’t think it is alarming because 6 percent is still high,” presidential spokesperson Harry Roque said at a press briefing.

Despite the lower-than-expected figures, the Philippines remains one of the best-performing economies in Asia behind Vietnam’s 6.8 percent and China’s 6.7 percent for the quarter.

“The slowdown is partly due to policy decisions undertaken that are expected to promote sustainable and resilient development,” Socioeconomic Planning Secretary Ernesto Pernia said. He was referring to the temporary closure of Boracay.

The shutdown, Pernia said, “partly made a dent on the economy with growth in exports of services slowing to 9.6 percent in the second quarter from 16.4 percent in the first.”

The government has said that the resort island draws 2 million tourists each year and pumps roughly $1 billion into the economy.

Pernia earlier said the closure of Boracay would cut GDP growth this year by 0.1 percent.

The island was shuttered in April for a six-month cleanup on the orders of President Duterte, who described the resort as a “cesspool” sullied by tourism-related businesses flushing sewage into the sea.

When Boracay reopens in October, Pernia said there would possibly be “even more tourists.”

Roque said President Duterte would not hesitate to protect the environment even if this would affect the growth of the economy.

Pernia said that had it not been for the elevated inflation rate, GDP growth “would have been well within our target of 7-8 percent.”

In the second quarter, inflation averaged 4.8 percent, beyond the government’s target range of 2-4 percent for the entire year.

Others put the blame on the Tax Reform for Acceleration and Inclusion (TRAIN) Act.

Inflation rose to a new five-year high of 5.7 percent in July.

The TRAIN law, which took effect on Jan. 1, increased or imposed new excise on goods like oil, cigarettes, sugary drinks, vehicles and metallic and nonmetallic minerals to compensate for a tax-exempt personal annual income that was raised to P250,000.

Pernia attributed the “lackluster” performance of the mining and quarrying sector to the closure of some mining pits and to the imposition of excise on minerals.

Also, “the stricter enforcement of regulations on aquaculture producers at Laguna de Bay resulted in the drop in freshwater fish catch,” he said.

Agriculture’s anemic growth of 0.2 percent did not help.

“We are also gravely concerned about the almost stagnant output of the agriculture sector,” Pernia said.

He noted that a “gross deficiency in the domestic production of food” helped fuel inflation.

The government is preparing a raft of “temporary” measures to improve food supplies, Pernia said, including reducing import duties of certain products and possible lifting of quotas on rice imports.

The National Economic and Development Authority chief reiterated that the TRAIN law must not be blamed for the slower growth. He said the tax reform law even boosted consumer spending in the second quarter.

“In the case of household consumption, higher disposable incomes resulting from the recently passed tax reform package and improved labor market conditions are seen to help sustain growth,” he said.

Household final consumption expenditure growth slowed to 5.6 percent in April-June from 6.2 percent a year ago, data from the Philippine Statistics Authority (PSA) show.

Lisa Grace Bersales, head of the PSA, noted that consumers had cut their spending on cigarettes and clothing. —WITH REPORTS FROM CHRISTINE O. AVENDAÑO AND AFP