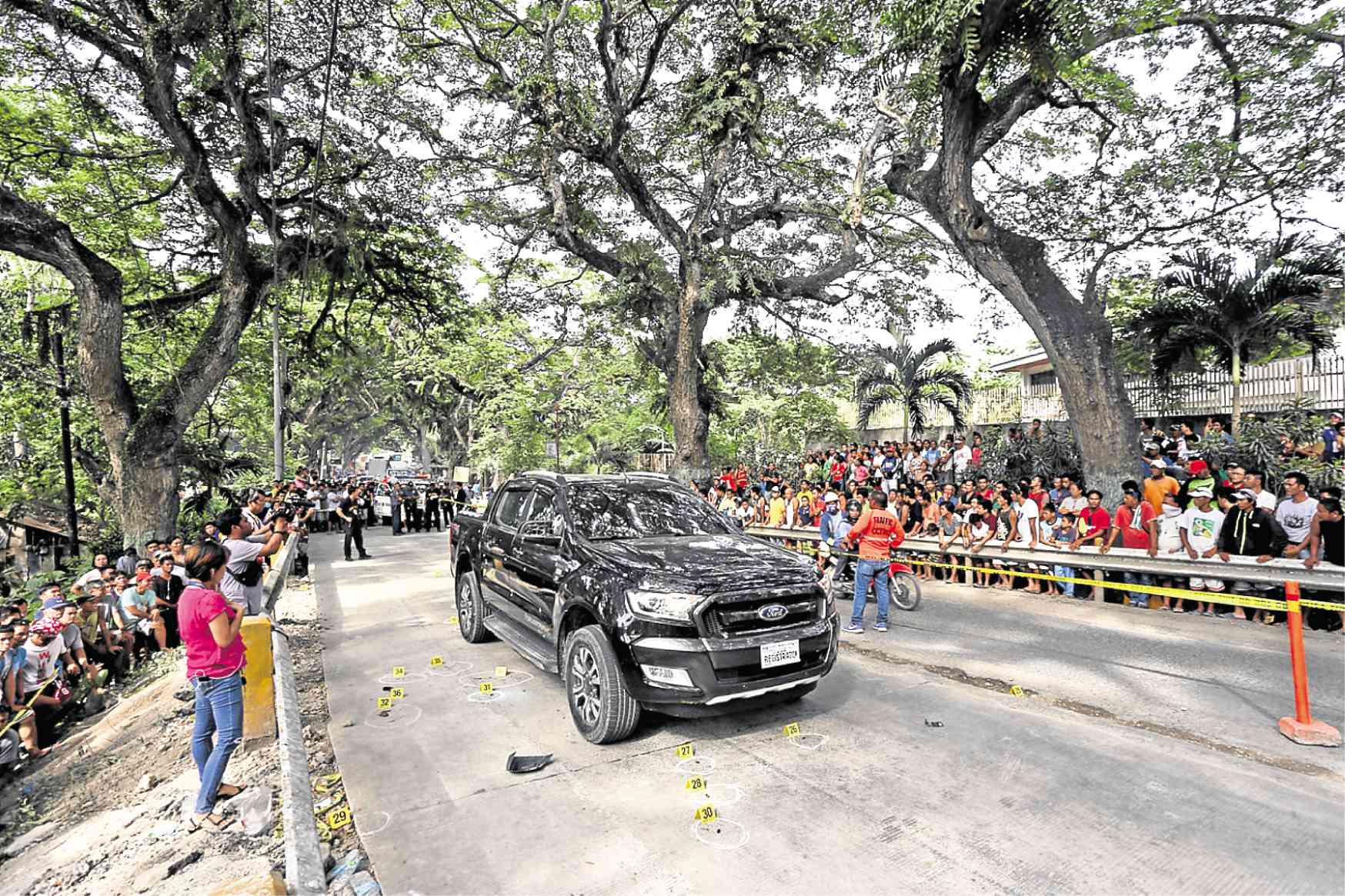 CEBU CITY — Von Rian Tecson, a senior agent of the Philippine Drug Enforcement Agency (PDEA) in Central Visayas region, was about 100 meters away from home in Carcar City on Wednesday afternoon.

But Tecson did not make it alive as four men on board two motorcycles peppered his vehicle with bullets as it slowed down along the main highway of Barangay Perrelos in Carcar at 1 p.m.

The 41-year-old PDEA agent died from bullet wounds to the head and body. His driver, Arnulfo Bauyaban, was hit on the leg but managed to run away.

Bauyaban, in an interview, said Tecson was able to fire back and hit one of the gunmen who tried to open the door of the front passenger seat where the agent was seated.

PO2 Joe Marie Villar, Carcar police investigator, said the gunman was rescued by his companions. The group, aboard a Mitsubishi Pajero, sped off toward the northern section of Carcar.

Tecson’s driver said one of the suspects appeared to be a woman.

Recovered at the crime scene were 30 empty shells for an Armalite rifle, 9mm pistol and .45-caliber gun.

Tecson, a team leader in local antinarcotics operations, was among three men who were gunned down by still unknown assailants since 11 p.m. Tuesday, bringing the number of persons killed in gun attacks in Cebu province to 117 since February.

Wardley Getalla, newly installed PDEA regional director, said Tecson and other Cebu-based agents were preparing to transfer to the PDEA Western Visayas office in Iloilo next week, as ordered by their superiors.

“This incident (killing of Tecson) was really unfortunate. He was supposed to move to Iloilo and was just preparing his papers,” he said in a telephone interview.

“Let us allow the proper agencies to do the investigation,” Getalla said.

Tecson was the second officer in PDEA Central Visayas who was killed this year.

On July 27, PDEA agent Baby Earl Rallos was shot and killed while driving his car along Villalon Drive in Barangay Capitol Site in Cebu City.

Three packs of “shabu” (cyrstal meth) were found inside Rallos’ car but his family and friends maintained that the agent was never involved in the illegal drug trade.

Getalla called on all PDEA agents to be more careful.

“The risk of being killed is part of the life of a law enforcer so I told my men to be careful at all times. Of course, we have to pray always so we can ensure the safety of every agent,” he said. 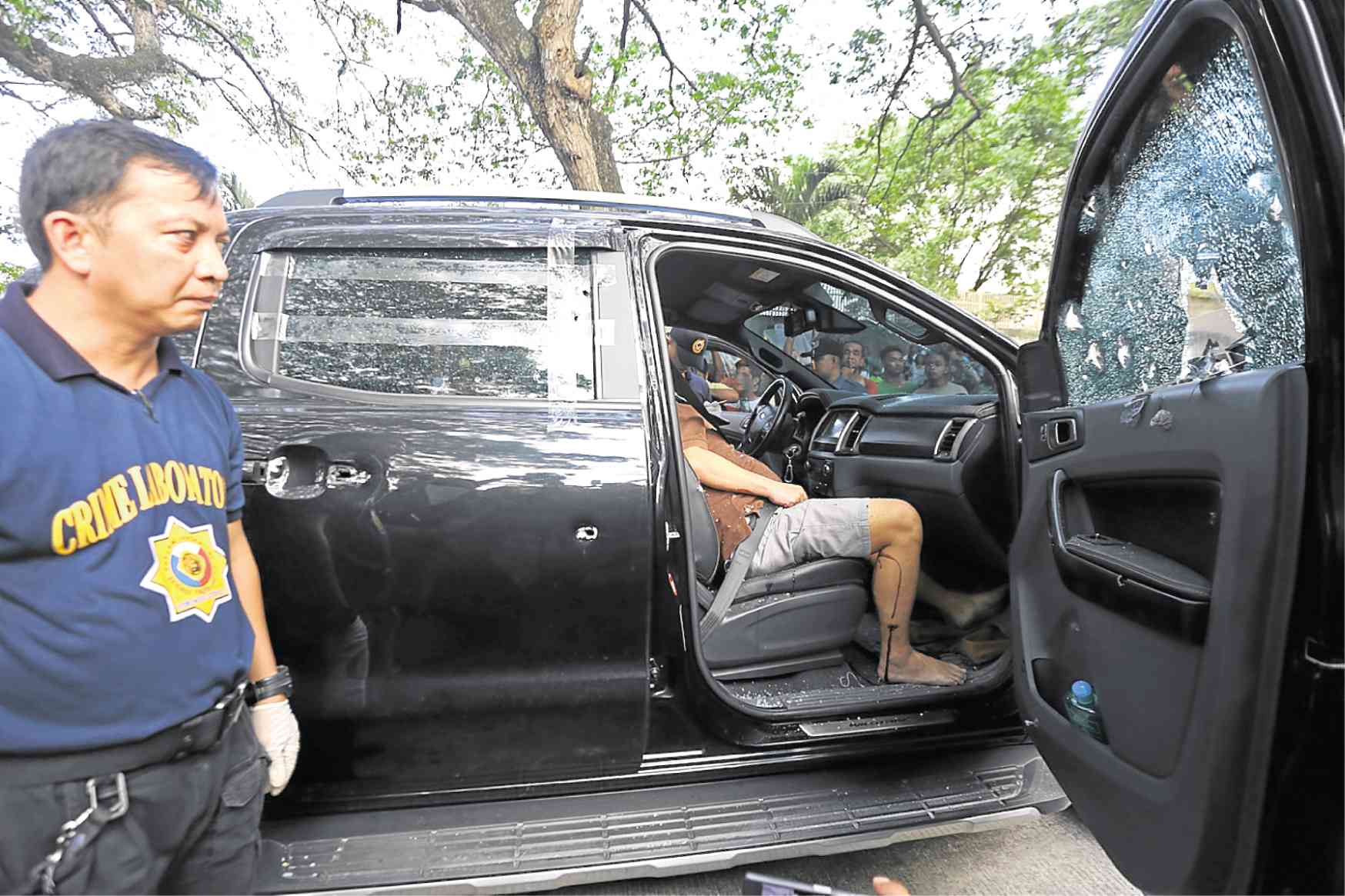 FIRING BACK PDEA agent Von Rian Tecson, according to police, was able to fire back at his attackers, wounding one of them. —JUNJIE MENDOZA/CEBU DAILY NEWS

“He told me that he received threats from a suspected drug lord who they arrested earlier. He was told that he and his team members would be killed,” he said.

The policeman said his brother did not identify the person who threatened him.

“He and (slain PDEA agent) Earl Rallos were close friends. I told him to be vigilant and careful, but he just laughed it off,” SPO1 Tecson said.

Senior Supt. Manuel Abrugena, Cebu provincial police director, ordered all station chiefs in the province to visit hospitals in their areas and verify whether one of the suspects was taken there for treatment.

Supt. Gregorio Galsim, Carcar police chief, said they received reports that a man with a bullet wound was taken to South General Hospital in Naga City on Wednesday afternoon.

Galsim said one of the hospital guards was told by the persons who accompanied the wounded man that the latter was accidentally hit at a firing range.

“We’re validating that,” he said.