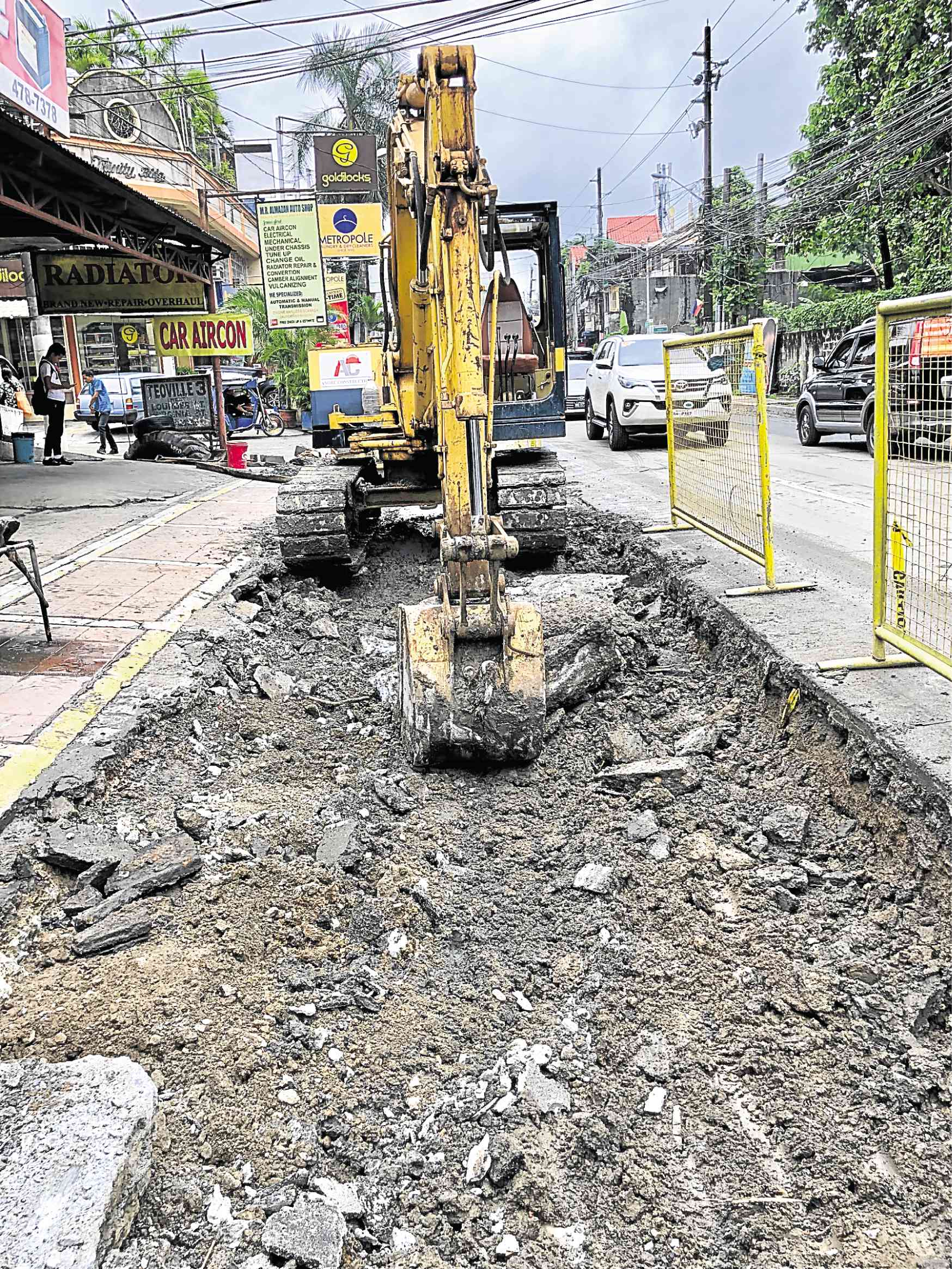 On President’s Avenue which cuts through Barangay BF Homes in Parañaque City, a drainage project on a 220-meter stretch of the busy road has been giving motorists and business owners a headache since it began in March.

But its most glaring effects — unprecedented gridlock and impassable storefront driveways—may be the least of the problems posed by the project.

The head of a group that monitors public works spending said the P8.8-million drainage system was “unnecessary, obscenely overpriced and excessively delayed.”

According to Citizens Infrastructure Integrity Watchdog (Infrawatch), President’s Avenue, which is both a residential and commercial hub in the city’s largest village, already has existing drainage systems on both sides of the two-lane road.

A signboard in the area indicated that the project, described as a form of “flood control,” was being implemented by the Metro Manila 2nd District Engineering Office of the Department of Public Works and Highways (DPWH), with L.M. Canlas Construction as contractor.

In an interview, Parañaque Mayor Edwin Olivarez said he was “monitoring” the project.

Although an initiative of the DPWH, there should have been a building permit from the City Engineer’s Office for construction to begin, he added.

Olivarez said the DPWH had informed him that the two existing drainage systems “could not handle the volume of water” being dumped by strong rains on President’s Avenue.

Reached for comment, District Engineer Arleen Beltran referred the Inquirer to Flor Catuday, the project engineer for the drainage system who in turn said that, as the implementing party, she was not privy to the project’s rationale.

However, the executive director of Infrawatch, Ricardo Ramos, was incredulous.

A resident for seven years of Tahanan Village where the entrance is on President’s Avenue, Ramos told the Inquirer that he could not recall any flooding issues since 2012, when the second drainage was installed.

He also argued that if it was true that the two existing drains were not working, it would mean that Olivarez and the city government had been remiss in their duties.

Ramos, who previously chaired Task Force Boracay for the Department of Tourism in 1988, also took note of the cost of the third drainage system—a whopping P8,821,225.

The simplest way to understand how overpriced it was, he said, was to compare it to the cost of building a two-lane road at a width of 3.35 meters per lane, the DPWH standard.

“So this one-lane drainage project is more expensive than a two-lane national road? I’m being conservative [when I] say that [the drainage system] could be done for P5 million. It could actually be done for half the price,” Ramos said.

He added that the DPWH was using reinforced concrete pipes (RCPs) to channel the water into a nearby creek when high-density polyethylene pipes, which are being used in Boracay, could serve the same purpose and were at least 50-percent cheaper.

Ramos also took note of the “huge” 36-inch diameter of the RCPs, when a 24-inch diameter would have been more appropriate given the short length of the drainage and the existence of two others on the same road.

But perhaps the most glaring detail on the project’s signboard is one that could be easily missed. It listed the project’s target date of completion as Nov. 16, 2017, although construction started four months after the supposed completion date.

Menoy Gimenez, the owner of Tito Chef, one of the restaurants affected by the project, said their guard had recorded on a logbook that work on the road began only on March 17 this year.

“We’re just exasperated,” Gimenez said. “I try not to make it the centerpiece of my day but of course, it’s a cause for concern.”

Catuday told the Inquirer that construction should have started in May last year, but there were delays due to the difficulty of obtaining a clearance from the village.

Even so, Ramos maintained that the six months allotted by the DPWH to complete the project was too long.

Ramos said he himself built a 300-square-meter, four-bedroom house at Ayala Alabang Village in 1987 in the same amount of time the DPWH had set aside for the drainage project.

He outlined the process of building a drainage system—which includes excavating the road, laying down the concrete pipes, compacting and pouring concrete—which “could be finished in one month, even factoring in all the possible delays.”

“This is a job that can be done in one month that they cannot even finish in five,” said Ramos, who noted that workers were rarely onsite and had moved at a “glacial pace” after accomplishing partial concreting on top of the RCPs weeks ago.

“The mayor should have gone ballistic already,” added Ramos, who contended that Beltran, the district engineer, should be fired by President Duterte, who was supposedly “concerned about the slow pace of implementation of DPWH projects.”

Although small in comparison to the agency’s most ambitious projects under the administration’s “Build, Build, Build” program, Ramos said the drainage system was a microcosm of the ills that pervaded the DPWH from top to bottom.

If it could not be trusted with minor projects, “what more with the multibillion flagship projects under Build, Build, Build?” he asked.