Senators: Slow down on lowering tariff for imported food products 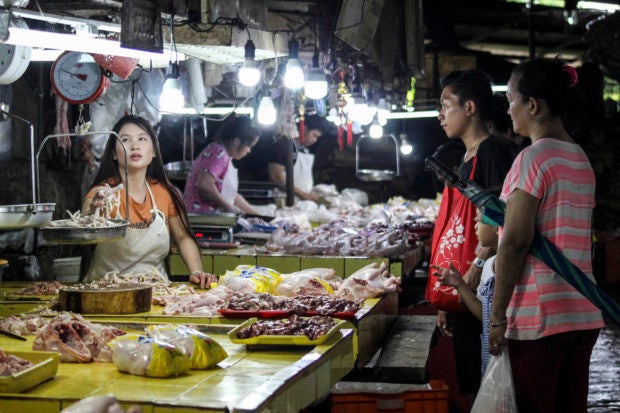 Consumers buy meat at a market in Quezon City. At least two senators have called for a thorough analysis on the effects of lowering tariff for imported fish, vegetables, meat and other food products on local distributors after the idea was raised to address the record-high inflation rate. July inflation stood at 5.7 percent, a rapid acceleration from the 5.2 percent inflation in June. (INQUIRER FILE PHOTO/ JAM STA ROSA)

At least two senators have called for a thorough analysis on the effects of lowering tariff for imported fish, vegetables, meat and other food products on local distributors after the idea was raised to address the record-high inflation rate.

Both Senator Panfilo Lacson and Senate President Vicente Sotto III recommended Thursday that the Senate should first look at the impact of such measure to the local food industry.

“We need to see the parameters of, not the details.  It will reduce prices definitely but at what cost to our local producers?” Lacson said in a text message to reporters.

“I suggest we have firstly a matrix on what the effect would be on our local industries of like products mentioned,” Sotto noted, in a separate message.

Lacson also explained on the possible repercussions once the tariff is lowered.

“Once the market is flooded with imported meat, fish and vegetables, prices will go down for sure following the law of supply and demand,” he said.

“However, our local producers—the farmers, hog and fowl raiders will also suffer since they may not be able to compete considering their high cost of production,” he noted.

Reducing meat tariffs was among measures discussed during a recent meeting between Speaker Gloria Macapagal-Arroyo and economic managers of the Duterte administration.

Lowering tax rate for imported goods like meat, fish, and vegetables is seen as one of many ways to slash prices of basic commodities and address skyrocketing inflation – at 5.7 percent in July from 5.2 percent in June, already surpassing government target averages for the whole year.

Lacson said if the government would lower the tariff, safety nets shoild be put in place for the sake of local food producers.

“They should balance, meaning ther should be some mitigation measures to cushion the impact on our local stakeholders — farmers and hog and poultry raisers,” he pointed out.   /kga