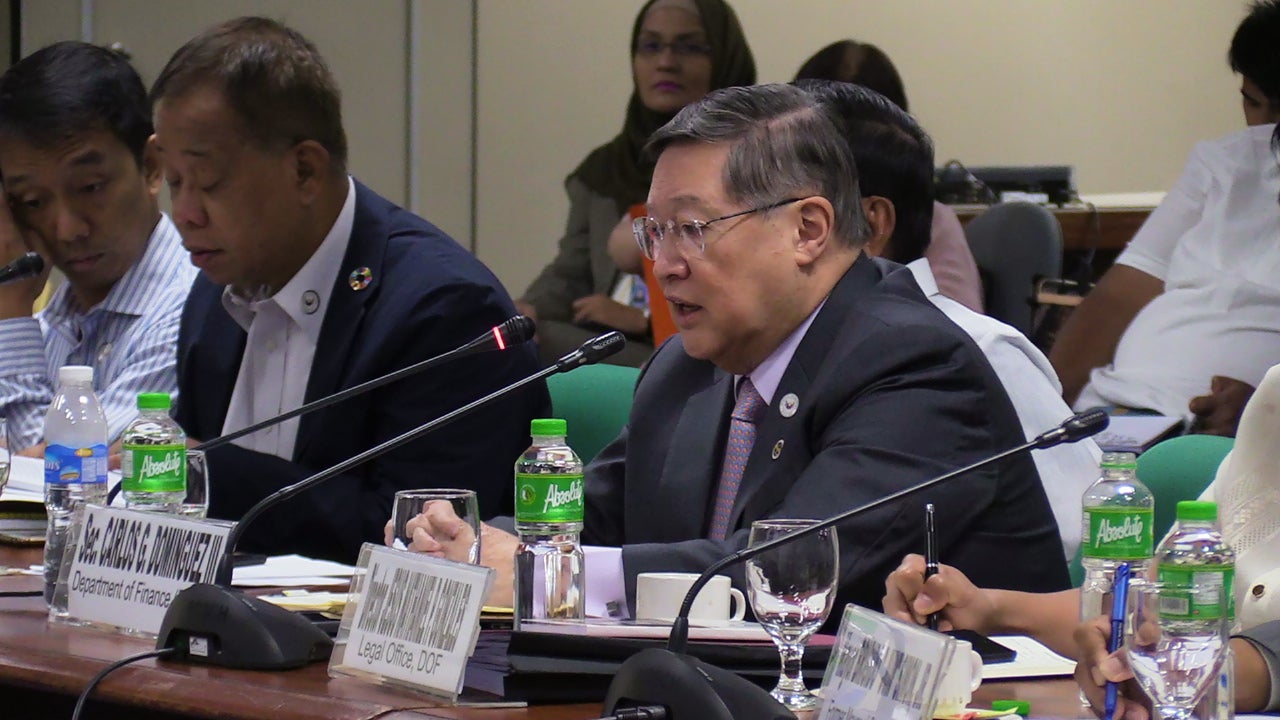 The Philippines’ investment grade credit ratings, which make it cheaper for the country to borrow money, will “go to hell” if the proposed shift to federalism proceeds, Finance Secretary Carlos Dominguez III told the Senate finance committee on Wednesday.

The shift will also be too costly for the government and may disrupt the economy’s growth momentum, Socioeconomic Planning Secretary Ernesto Pernia told the committee scrutinizing the government’s proposed P3.757-trillion  budget for 2019.

Saying it would hasten economic growth and lift the regions from poverty, President Rodrigo Duterte is pressing a change to the federal system, which requires a revision of the Constitution.

A consultative committee he appointed has produced a draft federal Constitution, which the President has submitted to Congress.

Answering questions from senators on the committee, Dominguez said that instead of the ambitious “Build, Build, Build” infrastructure program going on full swing, the big-ticket projects in the pipeline may instead be “build minus three,” or derailed by federalism.

Dominguez said he was “very confused” with the fiscal provisions of the draft federal Constitution.

Under those provisions, which call for a 50-percent share of the regions from the national government’s revenue collections, Dominguez said the government may incur “a very large” budget deficit.

“So what will happen to our credit rating?” Sen. Ralph Recto asked.

“Oh, it will go to hell,” Dominguez replied.

“And when the credit rating goes to hell, what happens to the Philippines?” Recto asked.

“Everybody pays higher interest rates” of up to 600 basis points, or about 6 percent,  Dominguez answered.

Credit ratings are a measure of a country’s creditworthiness.

As the stability of state finances is also related to its performance, credit scores serve as a proxy grade for the economy.

Improved ratings allow the government to demand lower rates when it borrows from lenders and those rates translate into lower interest rates for consumers and businesses borrowing from banks using government-issued debt paper as benchmarks for their loans.

Dominguez told the senators that during recent discussions, the major credit rating agencies expressed concern about the proposed shift to federalism, which they considered an “uncertainty” and a “political risk.”

“So there’s nothing to gain [from federalism], so to speak?” Recto asked.

“From that point of view, yes,” Dominguez replied.

As for the Duterte administration’s infrastructure program, Dominguez said it may be derailed by the shift to federalism.

Under the program, the government plans to roll out 75 flagship projects alongside spending up to P9 trillion on hard and modern infrastructure until 2022.

But the shift to federalism will directly cost the government P120 billion, not including costs such as disruption of government projects, Pernia told the committee.

“Our rough estimate in Neda [National Economic and Development Authority] is P120 billion but this is just the direct cost,” said Pernia, who is also the head of Neda.

The amount “does not include disruption to projects and other things that would be [taken into account],” he said. “Maybe our growth momentum will be disrupted also.”

Pernia’s estimate was more than double the figure given last month by Rosario Manasan, senior research fellow at the Philippine Institute for Development Studies, who calculated that the additional bureaucratic cost of the shift to federalism could reach P55 billion.

Sen. Francis Escudero prodded Pernia, Dominguez and other economic managers to give a breakdown of the expected expenditures to be shouldered by the government should the shift to federalism happen.

Escudero said he wanted the matter clarified considering how the Senate was “being pushed and cajoled into discussing” the move to revise the 1987 Constitution for a change to federalism.

Dominguez said it was difficult to make calculations based only on the draft federal Charter.

“The draft, as it is right now, does not lend itself to financial analysis,” he said.

“I’ll give you an example: I sat with a member of the [consultative committee] and discussed how they see the national debt will be paid, as well as military, foreign affairs … they said, ‘Oh no, don’t worry about that. The split will be done after national expenses,’” Dominguez said.

“I said, ‘No, it’s not in the draft.’ How can we compute the costs? We don’t know what the final road maps are going to look like. I had a long discussion with them and I [was] more confused than when we started,” he said.

Not wise to prioritize

The reservations expressed by Pernia and Dominguez prompted Sen. Loren Legarda to say that it might not be a wise idea to prioritize the federalism proposal in the Senate.

“It’s clear: It’s confusing. There’s no need for more confusion in the country. We don’t need more confusion and chaos. We need order and progress, and jobs for people in the grass roots,” said Legarda, chair of the finance panel.

“But do we prioritize this? We don’t want to slow down projects,” she said.

Legarda said: “We cannot confuse the people anymore. It’s a time for national unity and to surge ahead. When we use taxpayer money for information dissemination, we need a careful comprehensive study that derives respect from our constituents.”