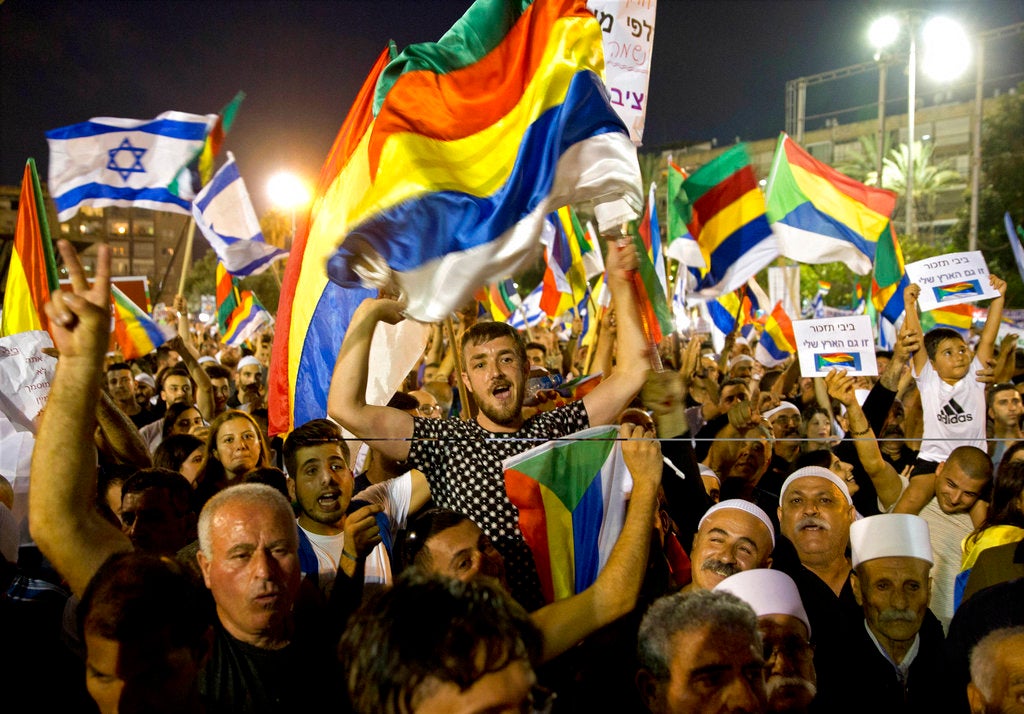 AHIHUD, Israel — Anwar Saeb spent two decades in the Israeli military, rising to the rank of colonel and suffering wounds in battle while serving as a brigade commander during the 2006 war in Lebanon.

Now, the 51-year-old lawyer, a member of Israel’s Arabic-speaking Druze minority, finds himself on the front lines of a different and unlikely battle — leading a campaign against a contentious new law that critics say sidelines minority groups.

Tens of thousands of Druze Israelis, along with Jewish supporters, thronged a Tel Aviv square on Saturday night in a rare demonstration against government policy by the typically muted community. Saeb and Amal Assad, a retired brigadier general, led the protest.

For Saeb, the campaign is especially painful. The Druze minority is fiercely loyal to the state and well-integrated in society, yet its members feel betrayed by the new “Nation-State” law.

“We don’t think it’s good for the Jewish people. It’s not good for the state of Israel,” he told The Associated Press at his office, which has been turned into the “Headquarters of the Nation-State Law Protest.”

Israeli and multicolored Druze flags covered nearly every inch of the walls, and his desk was stacked with posters bearing a Jewish Star of David in the Druze colors: green, red, yellow, blue and white.

The law, sponsored by Prime Minister Benjamin Netanyahu’s Likud party and passed by parliament last month, endorsed the country’s identity as the nation-state of the Jewish people.

But it also downgraded Arabic from an official language to one of “special standing” and emphasized “developing Jewish settlement as a national value.”

Advocates of the law say it merely enshrines the state’s existing character and upholds the rights of minority groups in a democratic society. But critics say it turned the country’s Arab minority — 20 percent of the population — into second-class citizens. The law has faced both civil opposition and legal protests, including multiple challenges in the Supreme Court.

Netanyahu’s government has had a strained relationship with much of the Arab minority. Many oppose his hard-line policies toward their Palestinian brethren in the West Bank and Gaza or remain scarred by his 2015 election-day attempt to galvanize supporters by warning that Arabs were voting in “droves.”

But the backlash among the Druze is surprising and potentially politically damaging.

The Druze belong to a small secretive sect that splintered off Shiite Islam in the Middle Ages, with populations concentrated in the mountainous areas of Lebanon, Syria and Israel. Less than 1 percent of the population, Israel’s 130,000 Druze carry outsized influence in the country.

Unlike the Muslim and Christian Arab minorities, Israeli Druze are drafted to the military and many strongly identify as Israeli. Most live in hilltop towns and villages in the Galilee, where memorials honor the more than 500 Druze soldiers and police officers killed in the line of duty.

They have risen to senior military positions and have served as senior ministers and diplomats.

Saeb said there was no conflict between his Israeli and Druze identities, likening it to the dual identity of American Jews. How would they feel, he asked, if the U.S. passed a law stating the country was a Christian nation?

“We Druze decided before the foundation of the state (in 1948) to go with the Jews, and if the Jews bite the dust, we go down with them,” Saeb said. “We’re not connected to the Jews to protect them, we don’t serve the Jews. We’re not loyal temporarily. We’re loyal to our home. This is my home.”

Speakers at Saturday’s rally said that special relationship between the Jews and Druze had suffered a major blow because of the Nation-State Law.

A handful of Druze soldiers in the Israeli military criticized the law on social media, breaking military rules that prohibit soldiers from expressing political opinions.

Lt. Amir Jmall wrote in a post directed at Netanyahu that he, his brothers, and father all served in the military and in return are treated like “second class citizens” by the law.

“I don’t want to continue and I am sure that hundreds of other people will stop serving and be released from the military because of your decision,” Jmall said. He did not respond to requests to be interviewed.

Anat Baeeny Kara, a Druze woman volunteering in the protest campaign, said her 17-year-old son is set to enlist in the Israeli military next year, and feared the nation-state law would turn Israel into a “racist state.”

“I always wanted my son to have a military career. I want him to safeguard the country’s security.” She said she’s still telling her son he must serve, “but there’s a feeling of being a mercenary, of not being an equal citizen.”

Netanyahu met last week with Druze leaders in a bid to assuage concerns. According to Israeli media reports, Netanyahu cut the meeting short after Assad, Saeb’s fellow protest leader, warned the law would “lead to apartheid.”

Despite the rally, Netanyahu doubled down on his defense of the law on Sunday, saying it doesn’t harm any citizens and was needed to “ensure the future of Israel as the state of the Jewish people for generations to come.”

Saeb says the law could be fixed by adding one clause: “equality for all citizens.”

The protest leaders have called for Israel’s declaration of independence, which enshrines protection of minority rights, to supplant the new legislation.

Issued in May 1948, it proclaimed the country as the Jewish homeland, rebuilt after 2000 years of exile. But it also called for the “development of the country for the benefit of all its inhabitants.” It guarantees “complete equality of social and political rights to all inhabitants irrespective of religion, race, or sex.”

Saeb said that he himself has never “felt second class” as a Druze in Israel, and his qualm is solely with government policies.

“I’m fighting so that the state doesn’t become second-class, because laws like this turn it into second-class state,” he said. /muf