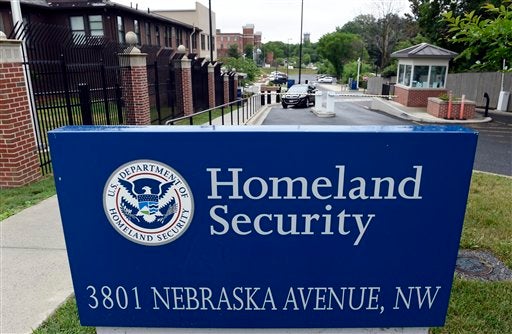 In this June 5, 2015, file photo, a gate leading to the Homeland Security Department headquarters in northwest Washington. AP

RICHMOND, Va. — A Muslim civil rights organization said Tuesday it plans to file a lawsuit challenging the constitutionality of the federal government’s terror watch list system, including a newly disclosed program in which air marshals have secretly monitored air passengers with no known terrorism links.

Gadeir Abbas, senior litigation attorney with the Council on American-Islamic Relations, said the group would file the lawsuit on Wednesday in federal court in Greenbelt, Maryland, on behalf of more than 10 Muslim travelers who alleged they faced harassment at airports and suffered other consequences because of being placed on a terror watch list. The plaintiffs are from Maryland, Florida, Michigan, Oregon, Kansas, New Jersey and Washington, D.C.

Abbas said the defendants named in the lawsuit would include the Department of Homeland Security (DHS), the Transportation Security Administration (TSA), and other government agencies.

The suit claims the travelers’ due process rights were violated and asks the court to grant an injunction to “prevent the federal government from putting innocent people, people who have not been charged, arrested or convicted of any crime, on any type of watch list,” Abbas said.

Abbas said the lawsuit will underscore both travel-related and non-travel related consequences of being on a watch list, including being subjected to searches and interrogations at airports, having electronics seized, not being able to get a license to transport hazardous materials or not being allowed to enter a military base.

The TSA, created after the September 11, 2011 terrorist attacks, recently acknowledged a program called “Quiet Skies” in which air marshals conduct secret observations of passengers for behavior including using the plane restroom repeatedly or displaying nervousness.

Michelle Negron, a spokeswoman for TSA, said the agency is unable to comment on the pending litigation.

“However, any traveler who believes he or she has been unfairly or incorrectly delayed or denied boarding can work though the DHS Traveler Redress Inquiry Program to resolve the issue,” Negron said in a written statement.

The DHS said that as a matter of policy, it does not comment on pending litigation. /kga