The groundbreaking ceremony for a $1.5-billion integrated resort called NayonLanding at the reclaimed area of Manila Bay in Parañaque City was all for naught.

President Rodrigo Duterte fired on Tuesday the entire management and board of directors of the Nayong Pilipino Foundation (NPF) as the agency and a Chinese casino operator launched the project.

The NPF is a government-owned and -controlled corporation attached to the Department of Tourism.

Landing International said the decision to replace the top NPF officials “did not affect the validity of the subject contract of lease.”

“Unless the lease contract is canceled or nullified on legal grounds by the courts, Landing has reason to believe that it is a valid leaseholder and can legally proceed with its project,” it said in a statement.

Landing said it was granted a provisional license by state-owned Philippine Amusement and Gaming Corp. (Pagcor) to operate a casino in 2022 — once the 10-year moratorium on new casinos at Entertainment City ends — provided that it complies with all the requirements of the law and existing regulations.

In his morning briefing, Roque said the President also had ordered the cancellation of the lease contract for a 9.5-hectare NPF property at Entertainment City beside Solaire Resort and Casino.

But Roque later said in a statement that the President had ordered a review of the contract, which the President found “flawed” because it was entered into without public bidding.

The project will feature Filipino-inspired architecture and interior design that will be the country’s newest entertainment and leisure hot spot by 2022.

Its centerpiece will be a Filipino cultural theme park with iconic architecture, and will have a 1,500-room world-class hotel and meetings and convention facilities.

The property is smaller than the 45-hectare Nayong Pilipino theme park beside Ninoy Aquino International Airport, which opened in 1970 but was shuttered in 2002 to make way for the airport’s expansion.

When it was still operating, the theme park showcased Filipino culture and landmarks of six regions, such as the Banaue Rice Terraces, Mayon Volcano and Chocolate Hills.

Roque said the President made his decision to fire the NPF officials during the Cabinet meeting in Malacañang on Monday after expressing exasperation that “corruption continues even in his administration.” 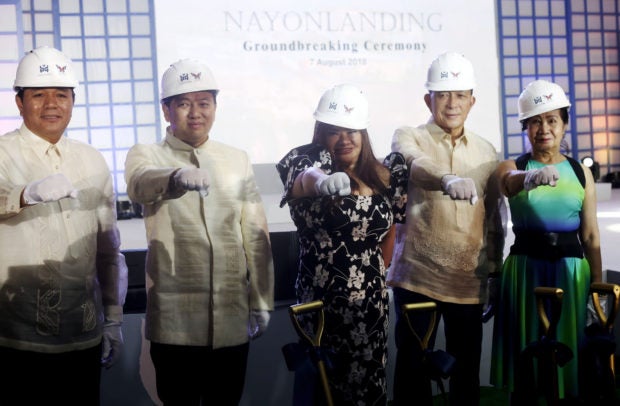 “He [the President] cited the case of Nayong Pilipino, which leased a government property for a ridiculous long period of time of 70 years, beyond a lifetime of anyone,” the Palace official said.

He considered the contract grossly disadvantageous to the government, Roque said.

Roque said the contract was reduced from 70 years, to 50 and then to 25, “but the rental payment was still unconscionable.”

In a complaint she filed in the Office of the Ombudsman in May, Maria Fema T. Duterte, a distant niece of the President, claimed that the government would lose at least P517 million a year, or more than P25 billion, in 50 years under the contract.

The NPF approved the proposal of Landing Resorts Philippines Development Corp. for a monthly lease of P150 per square meter, or P14.358 million a month for the 95,724-sq-m property for 50 years, or P172.303 million yearly, with an option to renew for 25 years, according to a Commission on Audit memo.

Maria Fema said the lease should be at least P57.434 million a month, or P689.212 million a year, as the current land appraisal value in the area, which is in the vicinity of Solaire and Okada Manila, was P600 per sq m.

In a statement, Ocampo said the term of lease was for 25 years, starting from the date of execution of the contract, and not 70 years. This was reaffirmed by Landing International.

Monthly rentals were pegged at P360 per sq m, and the advance rental amount was placed at P827.05 million.

On top of this, the NPF was to receive an additional monthly rental equivalent to 10 percent of net profits from the operations of its attractions and theme parks after taxes exclusive of the value-added tax.

“We negotiated what we believed then, and believe now, are most advantageous terms and conditions for the government and the people,” Ocampo said.

She said she would abide by the President’s decision, but denied any wrongdoing.

This is the second casino project under fire from the Duterte administration.

In April, it shelved a plan by Macau’s Galaxy Entertainment Group to build a $500-million integrated casino-resort on the holiday island of Boracay, just a month after the gaming regulator approved the project. The government cited environmental concerns for the move. —With reports from Roy Stephen C. Canivelk, Daxim Lucas and the wires