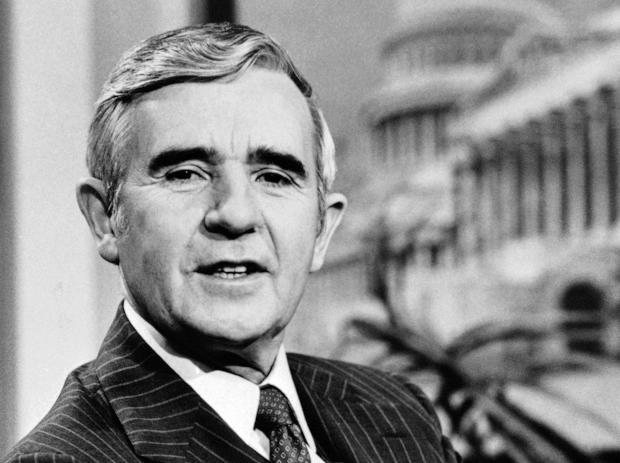 In this photo, taken April 1981, then Sen. Paul Laxalt (Republica-Nevada), appears on ABC’s “Good Morning America” television show in Washington. Laxalt, the conservative Republican who rose to political power as a Nevada governor, US senator and close ally to Ronald Reagan has died at age 96. (File photo from AP)

LAS VEGAS — Paul Laxalt, the son of Basque immigrants who rose to political power as a Nevada governor, US senator and close ally to President Ronald Reagan, has died. He was 96.

Laxalt died Monday at a health care facility in Virginia, according to the public relations firm The Ferraro Group.

Laxalt’s name became familiar to Filipinos in 1985, when Reagan sent the then senator on a diplomatic mission to urge Philippine President Marcos, a long-time US ally, to reform his government amid frequent protests since the assassination of former Sen. Benigno “Ninoy” Aquino Jr. on Aug. 21, 1983.

In the February 1986 snap elections, after Marcos retained the presidency amid charges of massive cheating against his opponent, Corazon Aquino, the widow of Ninoy.

In the People Power Revolt that followed shortly after the elections, Laxalt helped engineer the long-serving dictator’s resignation.

On the fourth and last day of the revolt, Marcos, already barricaded in Malacañang Palace, called Laxalt and asked him if he should resign.

Laxalt replied: “Mr. President, I am not bound by diplomatic restraints. I am talking only for myself. I think you should cut and cut cleanly. I think the time has come.”

A conservative Republican, Laxalt had a storied political career, including a brief run for president in 1987. But he described that bid as “the four most miserable months of my life,” and in a 2000 interview with The Associated Press said he was happy to be out of politics.

In the interview that focused on a memoir he wrote, Laxalt said he wasn’t trying to compete with his brother, the late, award-winning author Robert Laxalt, and planned to “hang onto my day work.”

Robert’s writing included “Sweet Promised Land,” his classic story about the Laxalts’ father, a Basque who left the Pyrenees in 1906 to herd sheep in the American West.

Paul Laxalt’s memoir told of his youth and rapid rise to political prominence in Nevada, his years as a U.S. senator, Reagan confidante, presidential aspirant and, finally, legal adviser and lobbyist.

Laxalt refused to write an insider’s “kiss-and-tell” account of the Reagan years. He said he wouldn’t retire on proceeds from the memoir because it avoided a salable mix of “gossip, sex or scandal.”

Born in Reno and raised in Carson City, Laxalt first learned the Basque language of his immigrant parents.

But once he learned English, he got an earful at the small hotel-restaurant his parents ran on Carson’s main street: lots of political talk, including bourbon-lubricated speeches from top elected officials who would show up for dinner and drinks.

After surviving horrific World War II combat duty in the Philippines, Laxalt married Jackie Ross and went to law school. He returned to Carson and practiced law with Ross’ father, who later became a federal judge. He started his political career by getting elected district attorney in 1954.

Laxalt won his first statewide race, for lieutenant governor, in 1962. He lost a US Senate race in 1964, but bounced back by winning the governor’s race in 1966.

“Not bad for a Basque sheepherder’s kid,” said Laxalt.

As Nevada governor, Laxalt was credited with repairing damaged ties between state and federal governments over Nevada’s gambling industry.

After one term as governor, Laxalt left politics and joined his family in a trouble-plagued hotel-casino venture.

The venture led to a bitter libel lawsuit against the Sacramento Bee over stories about the family’s Ormsby House hotel-casino.

Laxalt blamed the Bee for the suicide – one day before the lawsuit was settled – of his brother Peter’s ex-wife, who had been interviewed by the paper.

Laxalt’s marriage with his first wife, with whom he had raised six children, ended in divorce in 1972. He married Carol Wilson in 1976.

Laxalt returned to politics by winning a US Senate seat in 1974, defeating then-Lt. Gov. Harry Reid.

When Laxalt retired after two terms in 1987, he had become one of the most popular figures in Nevada’s political history.

“Paul Laxalt was the definition of what a leader should be: Kind, thoughtful and eager to extend a hand in friendship, regardless of political affiliation,” Reid, a Democrat who served more than three decades in Congress, said in a statement Monday. “His legacy is secured as one of the finest leaders Nevada has ever known.”

In Washington, Laxalt was one of Reagan’s closest and most trusted friends, his link to the Senate and his national campaign chairman, and general chairman of the Republican Party.

One of Laxalt’s grandchildren, Adam Laxalt, is the current attorney general in Nevada and the Republican gubernatorial candidate. In a statement, he said his grandfather “never lost sight of who he was or where he came from” and was his “ultimate role model.”

“He was the embodiment of the American dream, a pillar of the greatest generation, and he represented all that is best in American politics,” he said. -With additional information from Inquirer Archives /atm