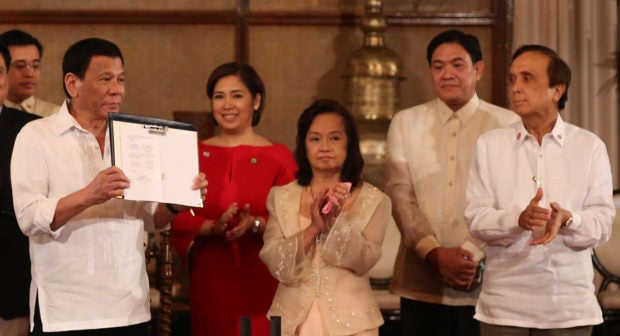 NATIONAL IDENTIFICATION President Duterte describes the Philippine Identification System Act that he signed in the presence of lawmakers on Monday as a “monumental legislative measure.” —JOAN BONDOC

Only those with illegal intentions should be afraid of the Philippine Identification System (PhilSys) Act, the President said after the signing ceremony in Malacañang.

“There is therefore no basis at all for the apprehensions about the Phil-ID, unless of course that fear is based on anything that borders on illegal,” he said.

He added: “If at all, the Phil-ID will even aid in our drive against the social menaces of poverty, corruption and criminal issues, as well as terrorism and violent extremism.”

The signing of the law coincided with the presentation and ceremonial signing of Republic Act No. 11054, or the Bangsamoro Organic Law.

Under the PhilSys Act, the Philippine Statistics Authority (PSA) will manage the national ID system.

In his speech, the President pointed out that the information would not be different from that recorded in other agencies collecting personal data.

He said data privacy safeguards were in place to ensure that citizens’ personal data were secure against identity theft and fraud.

“The PSA will work closely with the National Privacy Commission, the Department of Information and Communications Technology, and the multiagency PhilSystem Policy and Coordination Council to address all concerns pertaining to privacy and security,” the President said.

Calling the national ID law a “monumental legislative measure,” he noted that past administrations had tried but failed to introduce a national ID.

This was “partly because of the apprehensions peddled by some groups about privacy and data security,” the President said.

An opposition lawmaker, Akbayan Rep. Tom Villarin, for instance, said the passage of the law “casts a pall of gloom over privacy rights and an ominous threat to human rights.”

“The heavy hand of the state will now apply to getting a comprehensive profile of its citizens,” Villarin said in a text message to the Inquirer.

The Presidenty thought otherwise, stressing that a national ID system would, in fact, improve the delivery of services and cut down on fraud and bureaucratic red tape.

He pointed out that the Phil-ID, a single ID to be issued to all citizens and resident aliens, would “dispense with the need to present multiple IDs for different government transactions.”

“This will not just enhance administrative governance but reduce corruption, curtail bureaucratic red tape, and promote the ease of doing business, but also avert fraudulent transactions, strengthen financial inclusion, and create a more secure environment for our people,” he said.

The President’s spokesperson, Harry Roque, said the implementation of a national ID would help protect Filipinos against identity theft.

Roque said the ID would help promote national security as it would become easier to verify one’s identity and single out criminals or terrorists.

Sen. Panfilo Lacson, principal sponsor of the measure in the Senate, said many Filipinos could expect an easier time transacting with the government.

Lacson noted that there were 33 different forms of “functional” ID cards issued by government agencies.

Senate Minority Leader Franklin Drilon thanked the President for signing the measure and likewise gave assurance that it had enough safeguards to protect an individual’s privacy.

Magdalo Rep. Gary Alejano, principal author of the House measure, said the new law would benefit the poor and residents of far-flung communities who had been experiencing difficulties in securing proof of identity. —WITH REPORTS FROM LEILA B. SALAVERRIA AND MARLON RAMOS