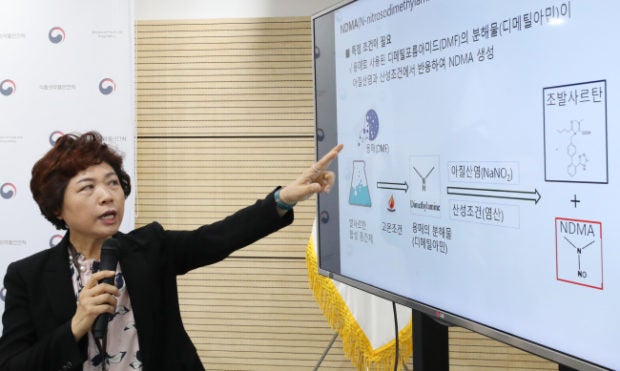 Kim Na-kyoung, head of the pharmaceutical review division at Korea’s Ministry of Food and Drug Safety, explains the results of an inspection of locally sold hypertension drugs containing above-permitted levels of valsartan at the Sejong Government Complex on Monday.

SEOUL — South Korea’s Ministry of Food and Drug Safety said Monday that it ordered a recall of 59 hypertension drugs containing valsartan produced by a local drug substance manufacturer, due to its inclusion of above-permitted levels of a chemical that could cause cancer.

After an inspection of all valsartan locally produced or imported to Korea, the drug regulator found that some batches of valsartan produced by Daebong LS contained more than 0.3 ppm of N-nitrosodimethylamine, or NDMA, a chemical that could increase the risk of cancer.

Daebong LS has been importing ingredients for its valsartan product from China’s Zhuhai Rundu Pharmaceutical, according to the ministry.

As a result, the Korean drug agency has ordered 59 hypertension tablets sold by 22 pharma companies, containing valsartan produced by Daebong LS, to be banned from further sales and prescription.

Last month, the Korean drug regulator ordered a total of 115 drugs containing valsartan from 54 pharma companies to terminate sales or production after China’s Zhejiang Huahai Pharmaceutical informed the European Medicines Agency that it had identified NDMA in its valsartan.

Similar actions have been taken globally, including the US where the Food and Drug Administration has initiated a recall of some valsartan tablets that contained above-permitted levels of valsartan.

Valsartan is a medication primarily used to treat high blood pressure and heart failure. In Korea, a total of 181,286 patients had been taking the drug according to prescription records as of Monday, the ministry said.

The Korean Ministry estimates that if a person were to take the highest valsartan dose of 320 milligrams from the recalled batches for three years — the period during which valsartan produced by the Chinese company were sold here — the chances of contracting cancer would be 1 in 180,000.