Trump admits son met with Russian to get info on opponent 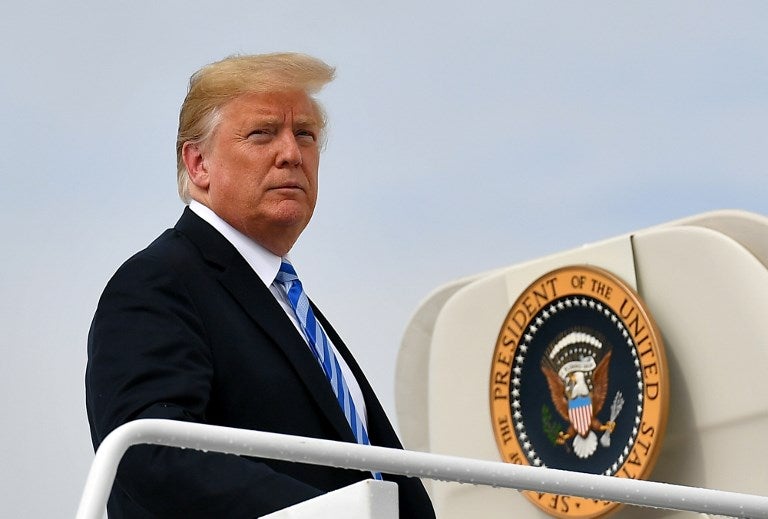 President Donald Trump (left) has admitted that his son, Donald Jr. (right), met with a Russian lawyer before the presidential elections to get information on an opponent. AP, AFP

WASHINGTON, United States – US President Donald Trump admitted Sunday that his son met with a Russian lawyer in Trump Tower in 2016 “to get information on an opponent” but defended it as “totally legal.”

It was Trump’s most direct acknowledgment that the motive for the June 2016 meeting was to get dirt on Hillary Clinton, his Democratic rival for the presidency.

As he has in the past, Trump insisted in a tweet that he did not know at the time about the meeting between his son Donald Jr. and Natalia Veselnitskaya, a lawyer with links to the Kremlin.

“This was a meeting to get information on an opponent, totally legal and done all the time in politics – and it went nowhere. I did not know about it!”

The meeting has come under intense scrutiny from Special Counsel Robert Mueller, who is investigating whether members of the Trump campaign coordinated with a Russian effort to sway the 2016 election in the Republican’s favor.

The president’s tweet about the meeting was one in a thread in which he reiterated criticism of Mueller, calling his probe “the most one sided Witch Hunt in the history of our country” peppered with “lies and corruption.”

The Washington Post reported Sunday that Trump has been brooding in private about whether his son unintentionally put himself in legal jeopardy by meeting with Veselnitskaya.

The Trump Tower meeting was arranged by British music promoter, Rob Goldstone, who told Donald Jr that he had “information that would incriminate Hillary and her dealings with Russia and would be very useful to your father.”

Young Trump responded “I love it” when first offered the “dirt” on Clinton, the Democratic nominee.

Donald Jr initially said in a statement to The New York Times that the meeting was “primarily” about American adoptions of Russian children.

He later admitted he accepted the meeting with Veselnitskaya in hopes of obtaining damaging information on Clinton, but said nothing came of it.

The Post had reported that the statement to The Times was dictated by the president, though at the time Trump’s lawyers denied his involvement.

They later reversed course in a memo to Mueller and said Trump was indeed behind the statement that omitted the prospect of collecting dirt on Clinton.

Lawyers described the statement as “short but accurate,” according to The Post.

Asked on Sunday why he had denied the president’s involvement, one of Trump’s lawyers Jay Sekulow told ABC that “I had bad information at that point.”

“I made a mistake in my statement,” he said. “That happens when you have cases like this.”

The president’s lawyers argue that the meeting, in and of itself, violated no laws.

“The question is how will it be illegal?” Sekulow said Sunday.

“What law, statute, rule or regulation has been violated?” /cbb