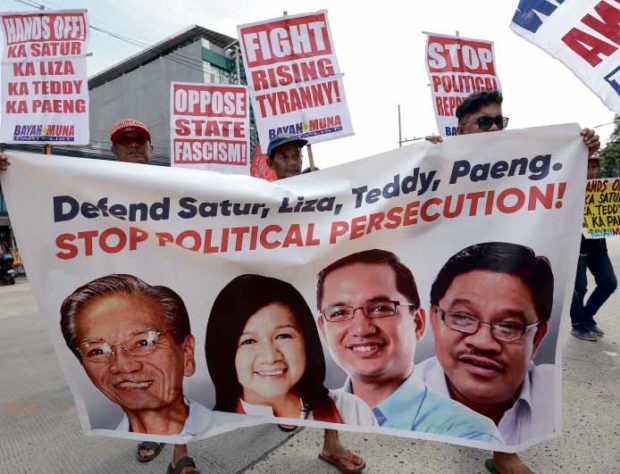 A lawyer of one of the four former lawmakers facing arrest for what militants said was a dead murder case being brought back to life described the bounty being offered for the arrest of the four as a “cheap shot” by “scumbags.”

“Cheap shot and a publicity stunt,” Olalia said in a text message.

“This malicious theatrical show vilifies decent and honorable human beings and incites violence against them,” he added.

“Incredible how a defender of human rights violators, shady characters and other scumbags continue to be self-righteous, pretentious clowns by judgmental and bigoted postures,” Olalia said without naming names.

While Olalia did not name names, lawyer Ferdinand Topacio, longtime legal counsel of the Arroyo couple Mike and Gloria, said the P1-million bounty he was offering for the arrest of Ocampo and his fellow former Bayan Muna lawmakers Liza Maza, Teddy Casiño and Rafael Mariano could be raised to P2 million.

Saying he was reacting to a statement made by Bayan Muna leader Renato Reyes that the bounty offer was a cheap publicity stunt, Topacio said “we are looking to increase the amount.”

In his “Itanong Mo Kay Prof (Ask the Professor)” program posted on Saturday on his Facebook account, Sison said there was no basis for the multiple murder charges filed against the four.

The arrest warrants stemmed from a 2006 case filed by the Nueva Ecija police during Speaker Gloria Macapagal-Arroyo’s term as President.

Sison accused the administration of using courts, police and the military “as tools of subjugation.”

Malacañang is distancing itself from the P1-million reward offered by Topacio and a concerned citizens’ group for the arrest of the four leftist leaders.

Presidential spokesperson Harry Roque on Sunday said the offer of a P1-million reward was a “private initiative.”

“As far as we are concerned, all aspects of this case are in the hands of the court and we look forward to an impartial and expeditious trial,” he said.

Read Next
Trader cries foul over smuggler tag
EDITORS' PICK
A delightful blessing!
Gov’t plans to open COVID-19 vaccination for 5- to 11-yr-olds by January 2022
Gov’t eyeing COVID-19 vaccine booster for essential workers, indigents by Dec. 10
Villar Group gears up for AllValue Shopping Party on Dec. 3; around P 1-million promos and discounts up for grabs
Omicron variant detected in more countries as scientists race to find answers
Legarda: Ending Violence Against Women, a cause for all
MOST READ
Quiboloy warns of ‘much worse than Omicron virus’ if his ‘persecution’ is not stopped
Suspected Omicron cases mild, says leading S. Africa doctor
Bongbong Marcos’ conviction in tax case not a crime involving moral turpitude — lawyer
Marcoleta defends pol ads on ABS-CBN
Don't miss out on the latest news and information.