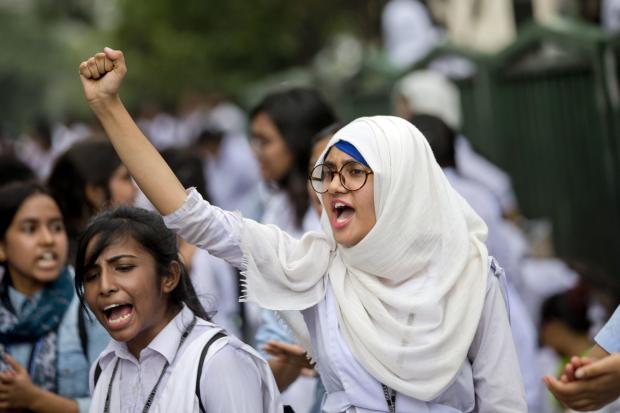 Bangladeshi students shout slogans as they block a road during a protest in Dhaka, Bangladesh, Saturday, Aug. 4, 2018. Five days of protests by tens of thousands of students angry over the traffic deaths of two of their colleagues have largely cut off the capital Dhaka from the rest of Bangladesh, as the demonstrators pressed their demand for safer roads. (Photo by A. M. AHAD / AP)

Dhaka remained largely cut off from the rest of Bangladesh as buses continued to stop plying from other parts of the country.

Witnesses and media reports said Saturday’s chaos broke out in Dhaka’s Dhanmondi area as police and ruling party men swooped in on the students.

The protests, which began last Sunday after two college students were struck and killed by a pair of buses, have paralyzed Dhaka, a city of 10 million.

Students have stopped thousands of vehicles – including those of top officials and judges – demanding to see if the cars were registered and the drivers licensed. /atm