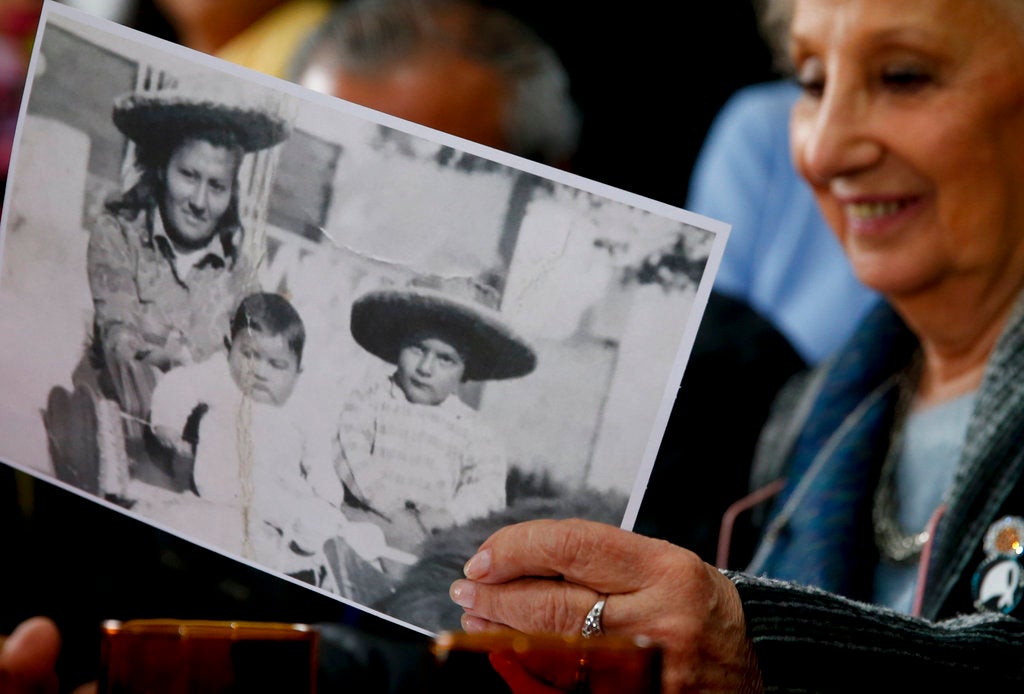 President of the Grandmothers of Plaza de Mayo human rights group, Estela de Carlotto, holds a photo of Rosario del Carmen Ramos, with two of her three sons Ismael, right, and Camilo, before she disappeared during Argentina’s military dictatorship, in Buenos Aires, Argentina Friday, Aug. 3, 2018. The human rights group announced they found Rosario’s other son Marcos Eduardo Ramos, who was kidnapped together with his brother Ismael in 1976 during the last military dictatorship in Argentina. (AP Photo/Natacha Pisarenko)

BUENOS AIRES, Argentina — DNA tests have determined the identity of a person taken from his mother as a baby by Argentina’s former dictatorship, a human rights group said Friday, bringing the number of such cases to 128.

The Grandmothers of the Plaza de Mayo said that the person who was identified only by the name Marcos is the biological son of Rosario del Carmen Ramos.

Former military and police authorities in the northern province of Tucuman kidnapped Ramos and her then five-month-old son and one of his half-brothers in 1976. Ramos was forcibly disappeared and was never found, while the two boys were taken to separate homes.

Marcos, who is now 42, found out the news about his true identity Thursday night and met with family members. The announcement was made at an emotional news conference attended by two of his half-brothers.

“It was an emotional shock,” said Camilo Suleiman, one of his half-siblings.

“We want to know his whole life story in 20 seconds. This is the restitution of 42 years of love that has yet to be lived.”

Officials during the dictatorship have been convicted of organizing the systematic theft of babies from political prisoners who were often executed. About 500 or so newborns were whisked away and raised by surrogate families. Several hundred have yet to be accounted for.

Human rights group estimate that more than 30,000 people were jailed, tortured, killed or forcibly disappeared during the 1976-1983 dictatorship.  /muf