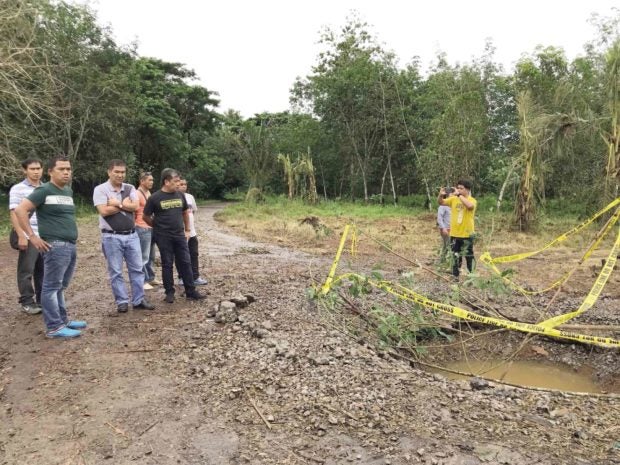 HOLE IN THE GROUND Gov. Mujiv Hataman (in Bangsamoro black shirt) of the Muslim autonomous region visits the site where a powerful bomb on Tuesday killed 11 people and gouged a crater on the ground close to a military outpost at Bulanting village, Lamitan town in Basilan province. —JULIE S. ALIPALA

LAMITAN CITY—Some officials and residents of this city believe that a foreign terrorist, not a member of the bandit group Abu Sayyaf, was responsible for last Tuesday’s bombing that killed 11 people.

The military has dismissed claims by the Islamic State (IS) jihadist group that it was responsible for the “martyrdom operation,” or suicide attack, pointing instead to the Abu Sayyaf under its Basilan leader Furuji Indama as behind the bombing.

But Mayor Rose Furigay said some families and relatives of Abu Sayyaf members lived in Lamitan and it was unlikely the group would “bomb the city where their families live.”

“They need someone without any relation to deliver the bomb and I guess, it could be a foreigner,” Furigay said.

Explosives packed in a van exploded early on Tuesday after the vehicle was stopped at a military checkpoint in Bulanting village, about 2 kilometers from the city center. One soldier, five militiamen and four civilians, including a child, were killed. The driver, the only person in the van, also was killed.

Dr. Arlyn Jawad Jumaoas, executive director of Save the Children in Basilan from War, also said survivors of the blast whom she had treated told her the driver was a foreigner who spoke Arabic.

Gregorio Inso, one of the militiamen wounded in the blast, said the van was heading for Lamitan from nearby Hadji Mohammad Ajul town and stopped at the Magwakit Patrol Base because its engine had stalled.

The militiamen manning the checkpoint and the driver could not communicate with each other, Inso said.

“Since the Cafgu [Civilian Armed Forces Geographical Unit] could not understand his language, one of the Cafgus’ wives, an OFW [overseas Filipino worker] in Saudi Arabia, offered to interpret using Arabic, and that’s how they learned he was a foreigner,” Inso said. “He was asking for help to push the car because the engine died.”

Jumaoas said the interpreter, Hadja Radiya Manda, and her husband, Muid Manda, perished in the blast.

A military intelligence operative, who spoke on condition of anonymity because he was not authorized to speak to the press, said a Scout Ranger camp about 500 meters away could have been the target of the attack.

The 3rd Scout Ranger Battalion camp is also the headquarters of Col. Montano Almodovar, whose unit was tagged as the “Marawi liberators” and has been recognized for killing the planners of last year’s Marawi siege—Basilan Abu Sayyaf leader and IS emir for Southeast Asia Isnilon Hapilon and the Maute brothers.

“That unit is colorful and multiawarded as far as Marawi liberation is concerned,” the operative said.

Gov. Mujiv Hataman of the Autonomous Region in Muslim Mindanao, who visited the blast site for the first time on Thursday, said authorities had tracked down the original owner of the van and the person who bought it later.

“But I leave this information up to here because I am not authorized to speak about this at this time,” Hataman said.

An intelligence report disclosed that the van was originally owned by a policeman from Iligan and it was sold to a local official in Basilan.

Like the military, Hataman believes the Abu Sayyaf, not the IS, was behind the bombing and the motive was extortion.

Lamitan Vice Mayor Roderick Furigay, Maluso Mayor Hani Bud and Basilan District Engineer Soler Undug have been targets of bombings and attacks in the past for failing to give in to the extortion.

Indama’s Basilan group and a certain “Aktoy” were demanding cash ranging from P50,000 to P300,000 monthly from the local chief executives and heads of agencies here, Hataman said.

Mayor Furigay said they had been ignoring the extortion and, as a result, they were always subjected to violent attacks like bombing.