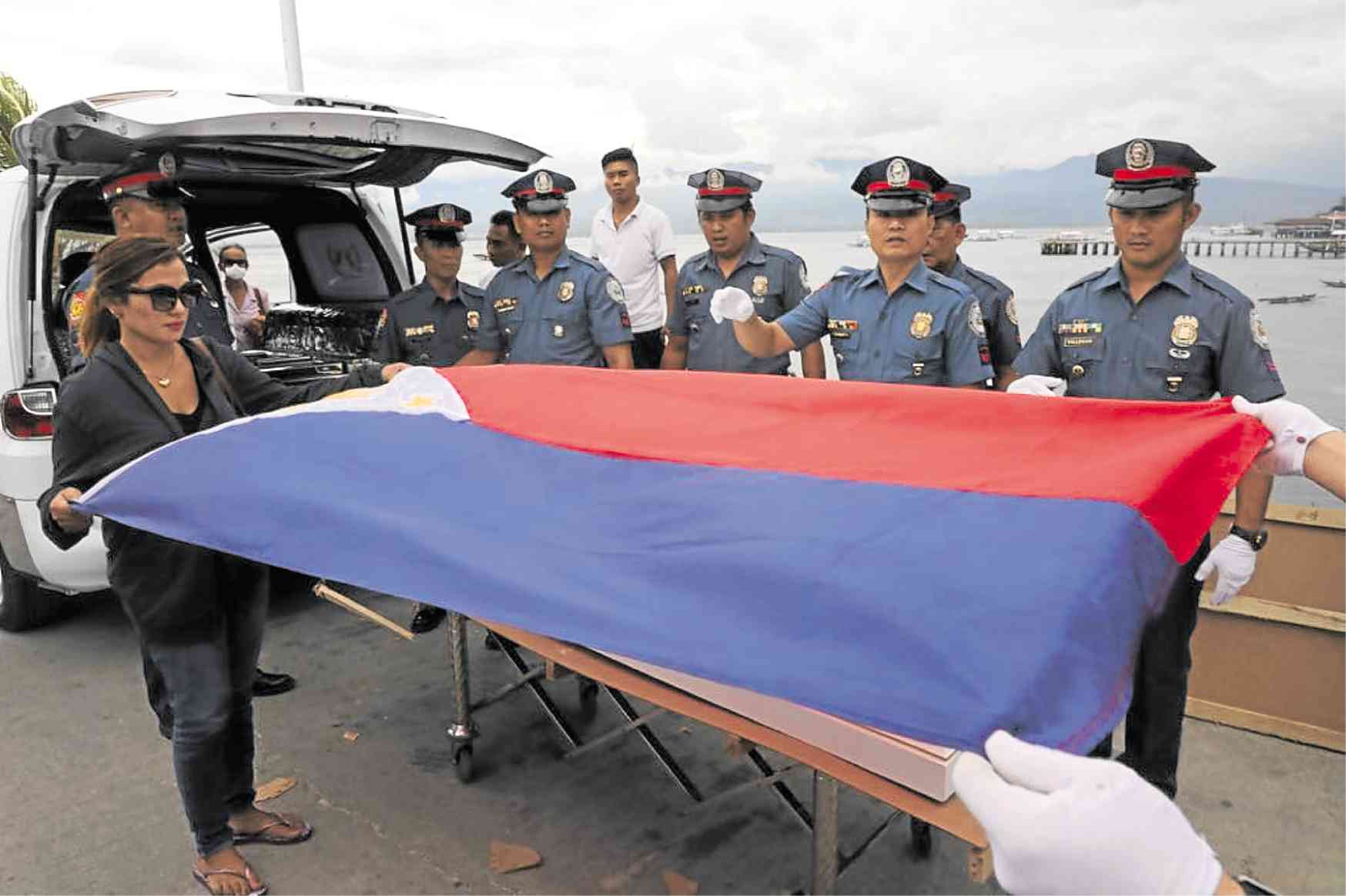 ANTIDRUG HERO The coffin bearing the body of PO3 Eugene Calumba is draped in the Philippine flag as it arrives at Liloan Port in Santander, Cebu, to be brought to his home province Negros Oriental. TONEE DESPOJO/CEBU DAILY NEWS

CEBU CITY—Police have completed their narrative on the attempt on the life of Jessilou Cadungog, charging him and his bodyguard with the killing of a police officer who died while allegedly executing an assassination plot against Cadungog, a village councilor and labor leader.

Aside from being charged with the killing of the supposed assassin, PO3 Eugene Calumba, Cadungog and his bodyguard, William Macaslang Jr., have also been tagged by police as drug suspects.

The regional office of the Philippine National Police’s Criminal Investigation and Detection Group (CIDG), which filed the charges, has taken custody of at least two witnesses, according to Hector Amancia, head of the regional CIDG office.

Amancia said one of the witnesses was a minor.

The witnesses saw Cadungog inside his vehicle, a Toyota FJ Cruiser, when he was supposedly shot by Calumba aboard a motorcycle driven by police asset Michael Banua.

Cadungog, village councilor of Tejero here and a local leader of Trade Union Congress of the Philippines-Associated Labor Unions (TUCP-ALU), had told the National Bureau of Investigation that he was not inside his vehicle during the failed assassination.

Macaslang, Cadungog’s bodyguard, was driving the councilor’s FJ Cruiser past 8 a.m. on Monday when he noticed a motorcycle get near.

The man behind the driver of the motorcycle pulled out a gun, prompting Macaslang to get his firearm and shoot.

The man turned out to be Calumba.

Banua was collared by village guards and bystanders.

According to Sinas, Calumba and Banua were on a surveillance operation in Tejero because of reports of rampant drug dealing in the village.

Sinas refuted allegations that Calumba and Banua were on a vigilante mission to kill Cadungog, saying the slain police officer and the police asset were victims in this case.

The NBI Central Visayas office filed a homicide case against Cadungog’s bodyguard, Macaslang, on Tuesday after Macaslang admitted he shot Calumba but in self-defense.

Sinas, in a press conference on Wednesday, said Cadungog was on President Duterte’s and the police’s drug watch list.

He said investigators conducted a background check on Cadungog following the killing of Calumba.

In a statement, TUCP president Raymond Mendoza assailed the “sordid attempt to justify and cover up” police involvement on the attempt on Cadungog’s life.

“Who will protect us now against lawlessness and the breakdown of the rule of law now that the police themselves are the ones who are killing and hurting us?” Mendoza said.

“Where do the weak and powerless go and seek protection?” he said.

“Here’s Jijing (Cadungog) who’s on his way to work and he murdered somebody? How would you explain that?” he said.

“Bad people are trying to operate here and I will be there,” he added.

“I am Cadungog’s security—close-in. I will protect him and protect my people,” Osmeña said.