Pacquiao scores another victory – this time in tax court vs BIR 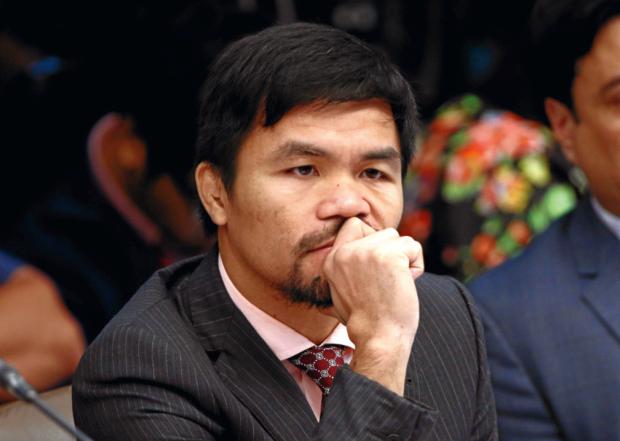 Following his victory in the boxing ring against Argentinian Lucas Matthysse, Sen. Manny Pacquiao scored another victory – this time, at the Court of Tax Appeals (CTA).

In a resolution promulgated July 27, 2018, the CTA First Division ordered the Bureau of Internal Revenue (BIR) to “cease and desist” from collecting over P3-billion worth of deficiency tax for taxable years 2008 and 2009 against the senator and his wife Jinkee.

The BIR’s tax assessment which was originally P2.26 billion went up to P3.29 billion due to surcharges and penalties.

The Pacquiao couple went to the CTA on August 2012 questioning the BIR’s assessment and the order for them to pay the supposed deficiency tax.

They said the BIR proceeded with the collection process even without a Final Decision on Disputed Assessment (FDDA).

However, in 2013, a tax lien was issued against the properties of Pacquiao as well as a warrant of distraint and levy and garnishment to cover the liability.

A tax lien continues to be attached for as long as the deficiency taxes, as well as the interest and surcharges, have not been paid. The BIR issues a notice of tax lien to protect the interest of the government as stated under the Tax Code.

Pacquiao questioned the BIR order before the CTA. The Tax Court conducted hearings on the case and eventually required them to pay more than P3 billion cash bond or a surety bond of P4 billion in order to stop the implementation of the BIR order against their assets.

The couple then took the case to the Supreme Court.

That same year, the high court ruled in favor of Pacquiao and ordered the tax court to recompute the bond or determine if it could be waived.

The CTA conducted hearings, and in its recent ruling, it said that it was “dispensing the required cash deposit or bond.”

“Respondent [BIR] is ordered to cease and desist from implementing the Final Decision on Disputed Assessment (FDDA) and from collecting the subject deficiency tax assessments issued against petitioners for taxable years 2008 and 2009 for lack of merit,” the CTA said.

The CTA also ordered the BIR “to lift the warrants of distraint and/or Levy and Garnishment issued in relation to the same FDDA and deficiency tax assessments, pending the final disposition of this case.”

“Petitioners’ Motion to Lift Notices of Tax Lien Annotated on Properties Registered in the Name of Petitioners filed on May 30, 2016, the same is granted. The Notice of Tax Lien dated January 8, 2015…served at the Register of Deeds, General Santos is cancelled and withdrawn,” the CTA added.

The CTA has set a pre-trial conference for the main case which is the petition filed by the senator and his wife the result of the assessment conducted by the BIR. /atm