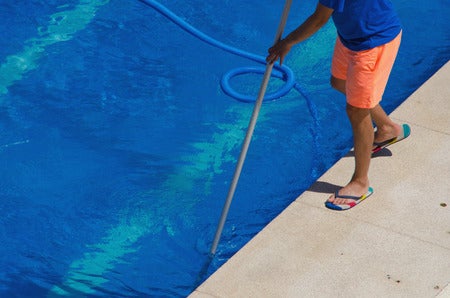 A public pool isn’t exactly the cleanest place to be, but one man drove away patrons after he defecated in the water while swimming in a public pool in Suzhou, China.

A video on Chinese video-sharing site Miaopai shows surveillance camera footage of the old man taking a dump in the water. The man casually climbs out of the pool without a word as swimmers point at him and leave the water.

The pool had to close down following the incident, with the feces scooped out with a fishing net, reports The Shanghaiist. Swimmers who were in the water were refunded their entrance tickets.

Public defecation is not new when it comes to Chinese tourists. The Shanghaiist reported on Monday, July 30, that a Chinese teacher allowed an elementary school student to poop on a Hong Kong subway station. The teacher was given a talking down from a cleaner and the person who took the video. “You let a child defecate and then you don’t clean it up. You want us Hongkongers to clean it up for you!” the woman filming the incident said.

Last May, a Chinese mother drew flak for allowing her baby to poop on the floor of a Taiwan airport, despite a nearby toilet. In April, a husband kept watch as his wife relieved herself in an elevator in the Shenzhen Metro.  Niña V. Guno /ra

Man poops on another driver during fit of road rage