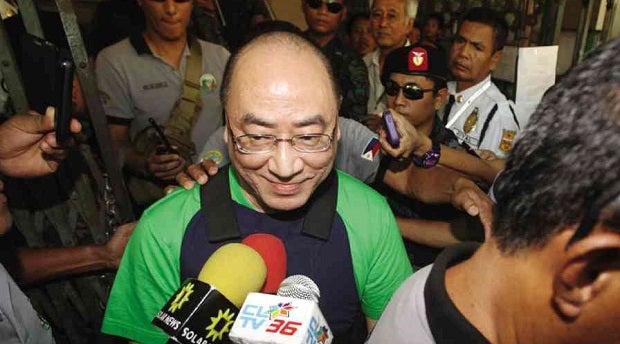 Detained real estate magnate Delfin Lee may be home soon after the Supreme Court on Tuesday downgraded his criminal case, allowing him to post bail while standing trial in connection with a P7-billion housing scam.

Lee has been behind bars in the Pampanga Provincial Jail the past four years. He was arrested in March 2014 in connection with the allegedly fraudulent housing projects of his company, Globe Asiatique Realty Holdings Corp.

“As a consequence, Lee … is entitled to bail as a matter of right,” Te said on Tuesday at a news briefing.

Syndicated estafa is a nonbailable offense.

Lee had yet to receive on Tuesday a copy of the Supreme Court decision, according to his counsel, lawyer Willie Rivera.

Te said it was up to the lower court judge handling the property developer’s case to determine the amount of the bail.

Pending the official release of the decision, however, Te could not cite the reasons of the justices in granting Lee’s petition seeking his temporary freedom.

Lee was charged by the Department of Justice (DOJ) for purportedly defrauding the state-owned Home Development Mutual Fund, more popularly known as the Pag-Ibig Fund.

The DOJ claimed that Lee used ghost buyers and engaged in the double sale of units at Xevera subdivisions in Bacolor town and Mabalacat City, Pampanga province, from 2008 to 2011.

He was arrested in 2014 by policemen outside an upscale hotel casino in Manila after hiding for two years from
authorities.

The businessman had argued that government prosecutors erred in indicting him for syndicated estafa after the appeals court had tossed out similar charges filed against him and his coaccused.

Ferdinand de Guzman, one of 28 homeowners who sued Lee, said he felt sad when he heard about the Supreme Court decision.

“It also confounds me why the court reached that conclusion when we were not even called to a trial to testify,”
he said.

The unit that De Guzman bought from Globe Asiatique was listed under the name of another person, which he uncovered after he paid P400,000.

Pag-Ibig later referred to this scheme as “special buyer-real buyer.”

In this scheme, a P750,000-housing loan, for instance, was obtained using the special buyer’s name, but it was the real buyer who was required to pay. —With a report from Tonette Orejas