Filipinos not preparing enough for ‘Big One’ – Phivolcs chief 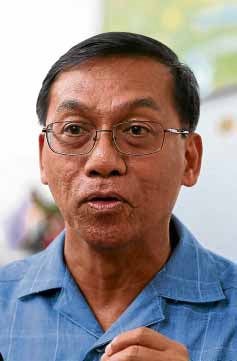 It has been 50 years since a 7.3-magnitude earthquake struck Luzon, causing death and destruction in Manila, but Filipinos may not have fully learned their lessons, according to the chief of the Philippine Institute of Volcanology and Seismology (Phivolcs).

While the Philippines has updated its building code to allow structures in the country to adapt to the destructive forces of nature, Filipinos may not have done enough to prepare for disasters like the temblor on Aug. 2, 1968.

“The main issue is implementation and inspection of buildings and houses during construction,” Renato Solidum Jr., officer in charge of Phivolcs and undersecretary for risk reduction and climate change at the Department of Science and Technology, said on Tuesday.

On Aug. 2, the country remembers how, 50 years ago, Filipinos were roused from their sleep by one of the strongest quakes to hit the country in recent memory.

In an effort to instill disaster resilience among Filipinos, Philvolcs has set up an exhibit and is holding a symposium at the Minor Basilica of the Black Nazarene in Quiapo, Manila.

The 1968 temblor, which claimed the lives of more than 260 people, gave Filipinos one valuable lesson: That the best measure against strong quakes is to make houses, buildings and infrastructure resistant to convulsions of the earth.

“That is, build these with appropriate design, standard materials and good workmanship,” Solidum said.

The 1968 temblor was eventually called Casiguran earthquake, as its epicenter had been traced to that coastal town in then Quezon province, now part of Aurora.

But the quake is also often referred to as the Ruby Tower disaster, after the apartment building in Binondo, Manila, that collapsed as the earth heaved, claiming the lives of 268 people and injuring 260 others.

“Ruby Tower collapsed from an earthquake with an epicenter more than 200 kilometers away. It is a reminder for everyone that a strong ground shaking even if the source earthquake originated far away can cause significant damage to houses, buildings and infrastructure if these are poorly built,” Solidum said.

A study conducted 17 days after the disaster by a four-member team commissioned by the Paris-based United Nations Educational, Scientific and Cultural Organization (Unesco), looked at the extent of the earthquake’s damage to structures, mainly in Metro Manila.

The study found structural flaws in the damaged buildings.

Ruby Tower Apartments, located on Doroteo Jose Street, was a 3-year-old, six-story building that housed 19 shops on the ground floor, 19 offices on the second floor, and 76 residential flats on the second to the sixth stories.

Many other buildings in Manila, among them structures that dated back to the American colonial era, were damaged in the temblor.

The team recommended the production of an “inspection and survey report to determine the areas that are most liable to severe earthquake damage.”

It also pushed for revision of the then City Building Code requirements “to raise the minimum standard of earthquake resistance,” as the Philippines still did not have a national building code.

“Advantage should be taken to recent developments in earthquake-resistant design to achieve this improvement at a minimum cost,” the report said.

The experts also recommended the creation of a zoning map for the country, based on known seismicity of each area, as well as “microzoning maps” for urban areas.

According to Solidum, the country has accomplished much in preparedness and resilience, having learned lessons from past natural disasters.

“Filipinos are now equipped with modern engineering technologies, seismic hazard information to serve as guide for design, and the appropriate codes to address the problems,” Solidum said.

He, however, said the current building code needed to be updated.

“There is a proposed Philippine Building Act that can further improve our laws and regulations on buildings and other infrastructure, which, I believe, is being coordinated by the (Department of Public Works and Highways),” he said.

Solidum also backed the conduct of honest-to-goodness stress tests for the quench-tempered (QT) and thermodynamically tested (TMT) steel bars widely used in the country today, even for high-rise construction.

“What is important for us to understand is that earthquakes do not kill people [but the] collapse of houses and buildings does,” he said. —Melvin Gascon