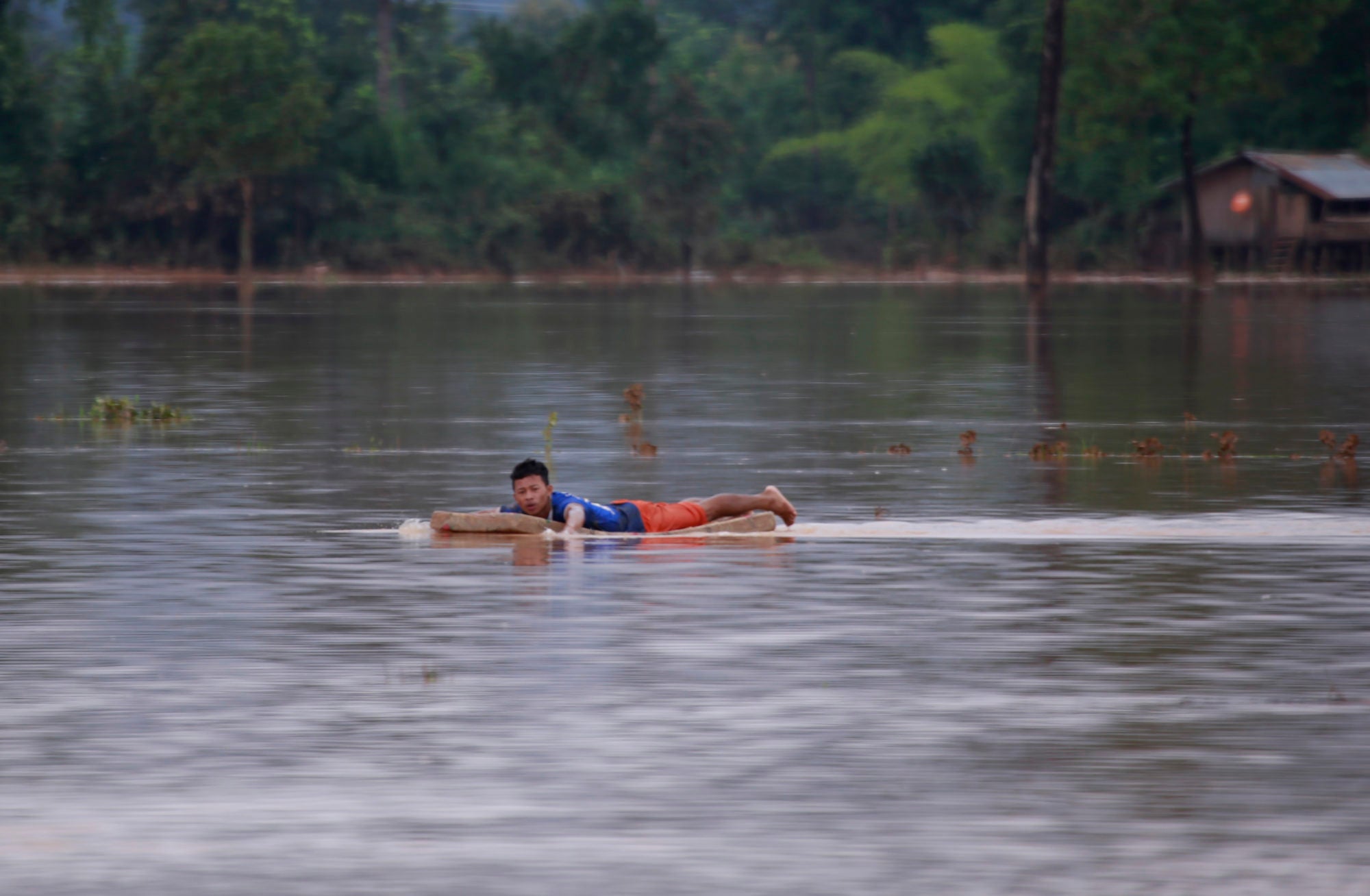 A man swims with matress in flooded village in Sanamxay district, Attapeu province, Laos Thursday, July 26, 2018. Authorities and the builder are investigating why a dam in southeastern Laos collapsed earlier this week, killing at least two dozen people and leaving over a hundred missing. (AP Photo/Hau Dinh)

VIENTIANE — Laos may not be able to meet its rainy season rice harvest targets this year as widespread flooding affects many parts of the country, according to authorities.

Last year, the country lost 30,000 hectares or around 130,000 tonnes of rice from flooding, drought and yellow-spined bamboo locust outbreaks, according to the Ministry of Agriculture and Forestry.

Last year, a total 330 villages in 24 districts of five provinces were affected by these issues, the ministry reported.

This year, the ministry had targeted about 4.2 million tonnes of rainy season rice on 817,800 hectares along with 100,000 hectares of upland rice. Farmers around the country planted more than 625,000 hectares or 77 percent of the plan, the ministry announced at the end of last month.

According to estimates, thousands of hectares of rice crop in northern provinces have been damaged as a result of recent flooding but authorities have yet not issued any official reports.

However, the government is actively encouraging farmers to produce rice on a commercial basis with the plan to export 300,000-400,000 tonnes with some bound for the European Union. The focus will be on black rice, kaynoi rice, and Hom rice, while new improved varieties such as Thadokkham, Tasano, Phonngam and Hom are also in demand.

To achieve the target, the ministry will try to increase rice yields and improve quality in line with internationally accepted standards.

Many businesses have exported their rice products to foreign countries such as China, Vietnam, Mongolia and European countries.

The value of rice exports from Laos in 2015 reached US$23.5 million and increased to more than US$33.6 million in 2016, while in the first nine months of last year earned US$31.14 million, according to the Ministry of Industry and Commerce.

Rice is the main commercial crop for the Lao domestic market and export along with coffee, banana, rubber, maize, tea, sugarcane, cassava, Job’s tear, and beans.

Laos plans to produce about 5 million tonnes of rice with the hope to export 1 million tonnes by 2020 to ensure food security and commercial sustainability.