‘Come and get me,’ boy pleaded before dying in California fire 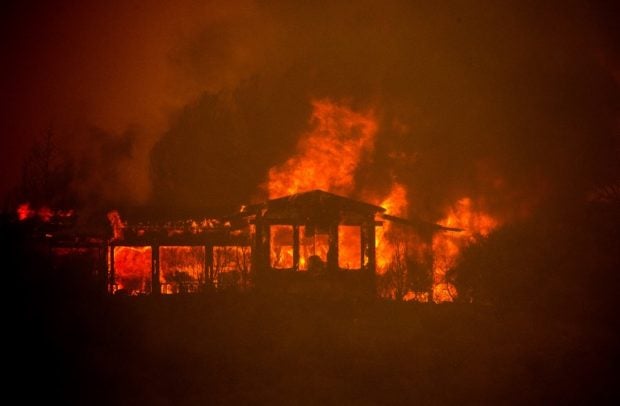 A house burns during the Mendocino Complex fire near Finley, California, on July 30, 2018. Thousands of firefighters in California made some progress against several large-scale blazes that have turned close to 200,000 acres into an ashen wasteland, destroyed expensive homes, and killed eight fire personnel and civilians in the most populous US state. The worst blaze, northern California’s Carr Fire, has killed six people since Thursday, including a 70-year-old woman and her two great-grandchildren aged four and five. They perished when flames swallowed their home in Redding. AFP

REDDING, United States – A young boy pleaded for rescue before he died along with two others in a California wildfire, an anguished relative recounted Monday, while other shaken survivors told of their flight from a “tornado” of fire.

Thousands of firefighters in California made some progress against several large-scale blazes that have turned close to 200,000 acres (80,940 hectares) into an ashen wasteland, destroyed expensive homes, and killed eight fire personnel and civilians in the most populous US state.

The worst blaze, northern California’s Carr Fire, has killed six people since Thursday, including a 70-year-old woman and her two great-grandchildren aged four and five. They perished when flames swallowed their home in Redding.

“I talked to Junior on the phone ’til he died,” Melody’s husband Ed Bledsoe told CNN, recounting the last words of the boy, his sister, and Bledsoe’s wife.

“He said ‘Come and get me, the fire’s comin’ in the back door. Come on, grandpa,'” Bledsoe said, his voice choking.

But he couldn’t get there in time to save them.

“I’ve been a lifelong resident of this community, and I’ve never seen a fire with such destruction here in this area ever before,” Shasta County Supervisor Leonard Moty said of the Carr Fire.

Alyce Macken said she had only minutes to flee with her husband Ted from the flames sweeping closer to her home in Redding. A sheriff’s officer pounded on the door and gave them 15 minutes to leave, Macken told AFP.

“We were out in 10 minutes. I was shaking, it just went by really fast,” the retiree said.

Macken told AFP that she met other panic-stricken neighbors at a nearby shopping center – and watched from afar as her home went up in flames.

About 38,000 people had been evacuated in Shasta County due to the Carr Fire, officials said, though some evacuation orders have been lifted.

Over the weekend, US President Donald Trump approved California’s request for federal help to fight the blaze and assist evacuees.

According to the California Governor’s Office of Emergency Services (Cal OES), 12,000 firefighters from as far away as Florida and New Jersey have deployed across the state.

A firefighter identified as Brian Hughes died on Sunday while battling the Ferguson Fire near Yosemite National Park, a major tourist attraction partially closed because of the fire.

Hughes “was struck and killed by a tree” while fighting the blaze, the Sequoia and Kings National Parks Service said.

Another firefighter died days earlier working at the fire around Yosemite.

Much of that blaze is in steep, rugged terrain with little or no access roads, officials said.

The remains of a person who ignored Carr Fire evacuation orders was found in a burned-out residence on Sunday, said Shasta County Sheriff Tom Bosenko.

Seven other people were reported missing, Sheriff Bosenko said, adding that 600 National Guard soldiers had been deployed for support duties such as roadblocks.

Police have reported cases of looting from areas emptied of residents — but then there was also the case of the missing python.

Sandra Dodge-Streich, an evacuee forced to move four times, warned that a 14-foot long albino python she owned was lost at her latest stop in south Redding.

“She is part of our store family and Reptile Exhibit. Please don’t be afraid of her — she is lost and scared!” Dodge-Streich, the owner of Redding Reptiles, said on Facebook.

The Carr Fire covers almost 99,000 acres and is 20 percent contained, according to Cal Fire, the state’s Department of Forestry and Fire Protection.

“Firefighters worked through the night to build control lines,” and will now work to mitigate potential spot fires, Cal Fire said in a morning update.

Cal Fire incident manager Bret Gouvea earlier told reporters “we’re feeling a lot more optimistic… as we’re starting to make up some ground instead of being on the defensive.”

But current conditions are perfect for fanning the flames: very hot, with little wind or humidity.

In southern California, where thousands fled the deliberately-set Cranston Fire, Cal Fire said crews had stopped flames from reaching Idyllwild town and the blaze was more than 50 percent contained by Monday.

Last year was California’s deadliest ever for wildfires, with more than 40 fatalities. /cbb